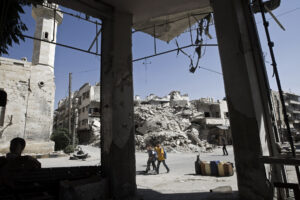 UNICEF Regional Director for the Middle East and North Africa, Ted Chaiban, said in a statement that they were victims of an attack on a market in Ariha, south of Idlib. The governorate is the last rebel held enclave in the country.

#Syria: Shocking reports of heavy civilian casualties in Ariha city in southern Idlib, where shelling by Syrian government forces/allies hit a market & roads near schools as students were on their way to school at the start of the day. pic.twitter.com/IrRaPmBX77

According to news reports, a total of ten people were killed in the attack on Ariha, while another 20 were wounded during the shelling.

Combined with Wednesday’s attack in Ariha, the Spokesperson described the recent escalation as “the most significant increase in hostilities in northwest Syria since the ceasefire agreement of March 2020.”

“The UN condemns all violence in Syria”, he added. “We remind all parties to the conflict to respect international humanitarian law, including the prohibition of indiscriminate attacks and the obligation to take all feasible precautions to avoid and minimize harm to civilians and civilian infrastructure.”

The numbers of children injured and killed continue to increase, said Mr. Chabain, noting that earlier on Wednesday, a military bus had come under attack in the capital Damascus.

According to media reports, two explosive devices attached to the bus, detonated as it passed under a bridge in the centre of the city during rush hour.

At least 14 were reportedly killed, which the Sana State News Agency described as the deadliest attack in the Syrian capital in four years.

“Today’s violence is yet another reminder that the war in Syria has not come to an end”, said the UNICEF official.

“Civilians, among them many children, keep bearing the brunt of a brutal decade-long conflict”, added Mr. Chabain.

“Attacks on civilians including children are a violation of international humanitarian law. Children should be able to reach their schools safely”, he underscored.

“We repeat our calls to those fighting, that children are not a target. They should be protected at all times especially in times of conflict.”