‘When journalists are targeted, societies as a whole, pay a price’, UN chief 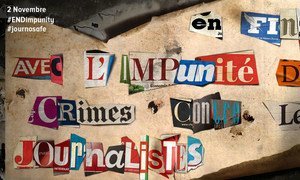 “Without journalists able to do their jobs in safety, we face the prospect of a world of confusion and disinformation”, UN Secretary-General António Guterres has warned in a statement released ahead of the International Day to End Impunity Against Journalists, which falls on 2 November.

“When journalists are targeted, societies as a whole pay a price”, added the UN chief. “Without the ability to protect journalists, our ability to remain informed and contribute to decision-making, is severely hampered”.

The report, “Intensified Attacks, New Defences”, also notes that killings of journalists have risen by some 18 per cent in the past five years (2014-2018), compared to the previous five-year period. More than half of journalist fatalities in the last two years (2017-2018) were in non-conflict zones. 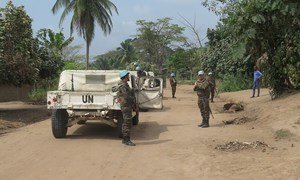 A Senegalese police officer serving with the UN Stabilization Mission in the Democratic Republic of the Congo (DRC) has been awarded special recognition for her outstanding service to the Congolese community and national police.

Major Seynabou Diouf was announced the 2019 UN Female Police Officer of the year on Friday.

She currently leads a task force that helps prevent and end sexual exploitation and abuse as part of the UN Mission in the DRC (MONUSCO), in Goma, the capital of North Kivu province.

“It is a deep honor to receive the UN Female Police Officer of the Year award. It means a lot to me”, she said in response to the news, adding that sexual abuse prevention is a priority for herself and her team, and said she believed the hard work is paying off.

The Secretary-General has said he is saddened by the death of at least 43 people following a landslide in the city of Bafoussam, in Western Cameroon earlier this week.

The landslide was triggered by days of heavy rainfall extending beyond Central Africa’s typical rainy season. According to media reports, the landslide happened on Monday night while residents were asleep. Many people are still feared lost in the rubble.

In a statement attributable to his spokesperson, António Guterres expressed his deep condolences to the families of the victims and affirms the readiness of the UN to contribute to ongoing efforts to address the needs of people affected. 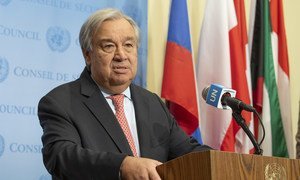 Mr. Guterres also lamented lives lost in a Pakistan train accident on Thursday, caused by a fire which broke out on a locomotive travelling between the coastal city of Karachi and northern Rawalpindi city.

Media reports suggest at least 70 were killed and another 30 injured in the fire that engulfed the train in the morning believed to have been sparked by a gas canister that exploded.

The Secretary-General extended  his “deep condolences” to the victims’ families, the Government of Pakistan and wished a swift and full recovery to those injured. 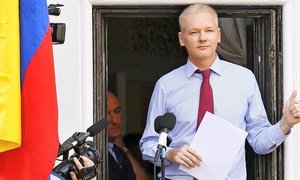 A UN expert on torture has warned that Wikileaks founder Julian Assange’s life is “at risk” in the high-security UK prison where he was sent earlier this year, amid concerns about his poor health.

The alert, from UN-appointed independent Special Rapporteur on torture, Nils Melzer, comes as Mr. Assange continues to be held in connection with a US extradition request – he faces espionage charges for having exposed evidence for alleged US war crimes and other misconduct in Iraq and Afghanistan.

In a statement, Mr. Melzer said that Mr. Assange “continues to be detained under oppressive conditions of isolation and surveillance, not justified by his detention status”.

The UN rights chief on Friday called on all actors to acknowledge the grievances of Haitians, many of whom have been demanding the president step down amidst violent demonstrations which ignited a sprawling emergency in recent weeks.

Haitians have taken to the streets repeatedly in the past 16 months, to protest corruption, inequality and economic hardship.

Since the latest demonstrations began on 15 September, sweeping the streets of the capital, Port-au-prince, 42 people have died, and 86 have been injured in escalated tensions, Michelle Bachelet, High Commissioner for Human Rights said, in a statement from her Office (OHCHR). 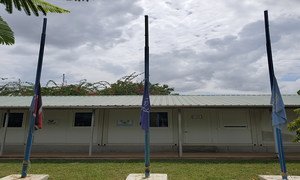 The UN migration agency, IOM, appealed on Friday for the immediate liberation of a volunteer and child who’ve been missing since a gun battle in South Sudan at the weekend, that claimed the lives of three agency workers.

According to IOM, they were caught in the crossfire between two armed groups in Isebi, Morobo County, in South Sudan’s Central Equatoria region.

The volunteers had been manning an Ebola virus screening point in border areas between South Sudan and the Democratic Republic of Congo to prevent the spread of the deadly disease.

It is understood that the four-year-old child is the son of a female IOM worker who was killed, along with two male team members.

Listen to or download our audio News in Brief for 1 November on SoundCloud: