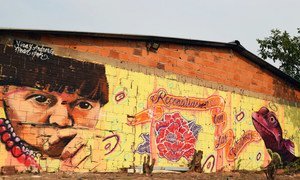 Alarmed by the “strikingly high number” of human rights defenders being killed, harassed and threatened in Colombia, the UN Human Rights Office (OHCHR) in the country on Friday, called on authorities to “make a significant effort” to “tackle the endemic impunity” surrounding these cases.

OHCHR described the dozens of deaths since the beginning of the year as a “terrible trend” that seems to be worsening.

Record number of people displaced by conflict and natural disaster 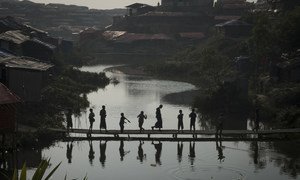 A record 41 million people remain displaced worldwide because of conflict and natural disasters, an increase of more than a million individuals in a single year.

The finding, by the Norwegian Refugee Council (NRC), a partner of the UN, points to ongoing clashes in Syria, along with often under-reported tensions in the Democratic Republic of the Congo (DRC), Ethiopia and Cameroon.

“Let me give the example of Cameroon, I was just there inside the west of the country,” said NRC’s head, Jan Egeland. “The southern and western anglophone parts of Cameroon, there is an armed conflict; nobody is talking about it, nobody is engaging to end (it) there’s no mediation, there’s no humanitarian programme commensurate to the scale of the suffering. But there’s hundreds of torched villages and there is now between four and five hundred thousand people displaced within the anglophone part of Cameroon,” he explained.

Apart from conflict, extreme weather events and natural disasters were also responsible for people fleeing their homes. Some of the worst storms and tropical cyclones were in China, India and the Philippines, NRC’s Internal Displacement Monitoring Centre said, with 10 million people displaced in those three countries alone.

In many countries, conflict and natural disasters combined to create mass population shifts, not least in Afghanistan, where drought has triggered more displacement than armed conflict. Similarly, the security crisis in north-east Nigeria has been aggravated by flooding that has affected 80 per cent of the country. 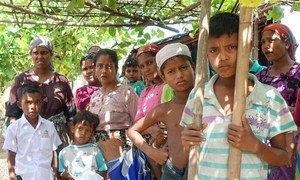 To Myanmar now, where the UN human rights office, OHCHR, said on Friday that the State military – known as Tatmadaw – may be responsible for opening fire on hundreds of men and boys in Rakhine state, killing six of them.

According to Spokesperson Rupert Colville, the victims are believed to have been detained following attacks by an armed group, the Arakan Army, on two Tatmadaw army bases in April – the latest escalation in a long-running conflict.

“According to the Tatmadaw, soldiers opened fire when the group tried to seize their guns, but other sources dispute this account and offer a different version. They say the Tatmadaw opened fire indiscriminately after one of the detainees tried to escape.”

Since 2 May, most of the boys and men have been released in groups, Mr. Colville said. However, up to 50 remain in “incommunicado” detention, without access to lawyers, doctors or any other form of protection.
They are reliant on family members for food, according to the UN human rights office, which says it is also concerned over an announcement that the episode will only be investigated by the military. 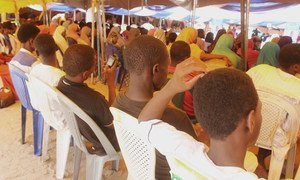 The decision by a large armed group based in north-east Nigeria to release nearly 900 youngsters has been welcomed by UN Children’s Fund, UNICEF, which has warned that those freed will need long-term help if they are to lead a normal life in the future.

“Today, 894 children, including 106 girls, were released from the ranks of an armed group called (the) Civilian Joint Task Force (CJTF) in Maiduguri, north-east Nigeria as part of this group’s commitment to end and prevent the recruitment and use of children,” said Spokesperson Christophe Boulierac. 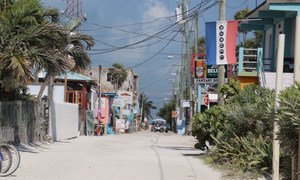 The UN Secretary-General, António Guterres, took note of the decision of the people of Belize and Guatemala, expressed through two referenda held in each country to submit their border dispute to the International Court of Justice (ICJ) for a final settlement. He welcomed “the spirit of cooperation with which both countries have sought to resolve this matter.”

The southern part of the Belizean territory is claimed by the Government of Guatemala.

Popular consultations were held on 15 April 2018 in Guatemala and on 8 May 2019 in Belize with 95.9 per cent and 55.4% of voters respectively choosing the ICJ to resolve the dispute.

Established by the UN Charter as the principal judicial organ of the UN, the Court is an essential mechanism for the peaceful settlement of disputes between countries. Member States voluntarily submit their disputes to the ICJ and, in doing so, they commit de facto to accepting its decisions. 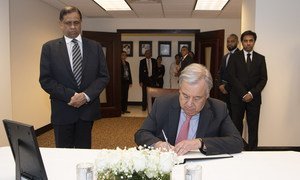 The UN refugee agency (UNHCR) is “extremely concerned” at the ongoing impact of the devastating church and hotel bombings nearly three weeks ago in Sri Lanka on the general population, but also on more than a thousand refugees and asylum-seekers, forced to flee their homes.

Following the wave of suicide bombings in which more than 250 died nearly three weeks ago, UNHCR is working closely with the Government, other partners and local communities, to ensure all refugees and asylum-seekers are properly looked after.

In the face of some actual and feared reprisals, together with death threats, around 1,060 refugees and asylum-seekers are still staying in local mosques, police stations and community centres.

“Many fled persecution in their home countries due to their religion or political beliefs,” said UNHCR Spokesperson, Babar Baloch on Friday.

Listen to or download our audio  News in Brief for 10 May 2019 on SoundCloud: