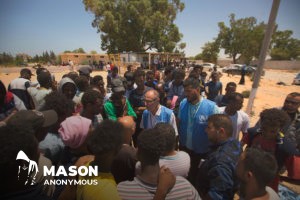 Senior UN officials call for return to sea rescues, after ‘the worst Mediterranean tragedy of this year’

Secretary-General Antonio Guterres, along with the heads of a number of UN agencies, expressed horror at Thursday’s reports that as many as 150 people may be dead after a boat they were traveling in capsized off the coast of Libya, making it the worst such tragedy in the Mediterranean this year.

Several of the senior officials have called for a return to sea rescues in the Mediterranean.

The Libya office of the International Organization for Migrants (IOM), published social media reports on Thursday that some 145 survivors of the shipwreck, mainly Eritreans and Sudanese, were returned to the Libyan shore. The survivors reported that some 250 were on the boat before it capsized, after engine failure.

In a Tweet, Mr. Guterres wrote that he was “horrified” by the news, and called for “safe, legal routes for migrants and refugees”. His comments were echoed by the head of the UN refugee agency (UNHCR), Filippo Grandi, and the UN children’s fund (UNICEF) chief, Henrietta Fore, both of whom also called for end to the arbitrary detention of refugees and migrants in Libya.

The relentless campaign of airstrikes in Syria has been met with a “collective shrug,” the top United Nations human rights official said on Friday, denouncing the world’s apparent indifference to the mounting civilian casualties as a “failure of leadership” by the world’s most powerful countries.

“Despite repeated calls by the United Nations to respect the principle of precaution and distinction in their conduct of hostilities, this latest relentless campaign of airstrikes by the Government and its allies has continued to hit medical facilities, schools and other civilian infrastructure such as markets and bakeries,” said Michelle Bachelet, UN High Commissioner for Human Rights.

Drawing attention to the death toll caused by a succession of airstrikes in Idlib and other parts of north-western Syria, she pointed out that “these are civilian objects,” and given the persistent pattern of such attacks “it seems highly unlikely” that they were all hit by accident.

Military chief of UN’s ‘most dangerous mission’, in Mali, confident progress can be made

The UN Multidimensional Integrated Stabilization Mission in Mali, MINUSMA, is one of the toughest UN peacekeeping operations.

Peacekeepers stationed there have sustained severe and regular casualties from the activities of armed groups in the north of the country, and many civilians have borne the brunt of the instability, which includes deadly inter-ethnic clashes.

The Force Commander of MINUSMA is the Swedish General Dennis Gyllensporre, He has had an extensive background in international peace operations, notably as liaison officer in Bosnia Herzegovina during the NATO-led Stabilization Force operation in 1997-1998, and also in Sudan’s Nuba Mountains, and in Afghanistan.

In an interview with Ben Malor from UN News, General Gyllensporre explained why the UN presence in Mali is essential. 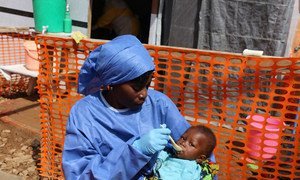 As the Ebola crisis in the Democratic Republic of Congo (DRC) continues, the UN’s World Food Programme (WFP) announced on Friday that it plans to double food assistance to people affected by the disease.

One year after the start of the complex outbreak in the volatile eastern part of the DRC – and 10 days since the first reported case in Goma, the region’s biggest city – a WFP spokesperson  said that the UN agency is “stepping up preparations for a potential further escalation of the epidemic”.

Over the next six months, WFP will significantly ramp up food assistance and nutritional support to 440,000 Ebola-affected people in DR Congo, the spokesperson announced, adding that this would include “primarily contacts of victims and their families, as well as confirmed and suspected cases”.

Calling for “bold political leadership” ahead of World Hepatitis Day, the UN World Health Organization (WHO) on Friday urged countries to take advantage of recent reductions in the costs of diagnosing and treating viral hepatitis, and scale up investments to eradicate the disease.

A new study by WHO, published on Friday in the Lancet Global Health magazine, found that investing $6 billion per year to eliminate hepatitis in 67 low- and middle-income countries would avert 4.5 million premature deaths by 2030, and more than 26 million deaths beyond that target date.

A total of $58.7 billion is needed to eliminate viral hepatitis as a public health threat in these 67 countries by 2030. This means reducing new hepatitis infections by 90 per cent and deaths by 65 per cent.

Listen to or download our audio News in Brief for 26 July on SoundCloud: