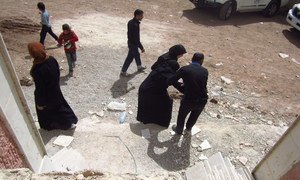 Almost daily violence in built-up areas and against health facilities in Syria continues to threaten the lives of civilians there, the UN rights office and humanitarians said on Friday.

At least 92 people have been killed in northeastern and northwestern Syria in the weeks following 9 October, when Turkish forces invaded Kurdish-held border areas in the northeast, according to the UN human rights office (OHCHR).

Spokesperson Rupert Colville told journalists that victims had come under fire from airstrikes and ground based strikes – and they’re increasingly targeted by improvised explosive devices used indiscriminately. In addition, dozens of health centres have come under fire, he said.

Here’s our wrap of all today’s news on the Syria crisis. 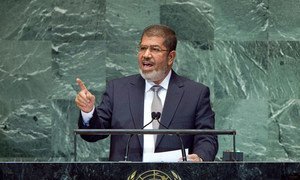 A group of independent UN human rights experts said on Friday that there was “credible evidence” that inadequate prison conditions in which former Egyptian President Mohamed Morsi was held may have led “directly” to his death in June, and thousands of other detainees may be at “severe risk”.

“Dr. Morsi was held in conditions that can only be described as brutal, particularly during his five-year detentions in the Tora prison complex”, said Agnes Callamard, Special Rapporteur on extrajudicial killings, together with the UN Working Group on Arbitrary Detention.

“Dr. Morsi’s death after enduring those conditions could amount to a State-sanctioned arbitrary killing”, they added. 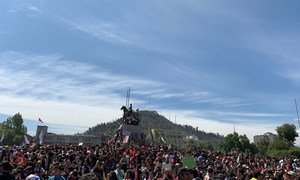 United Nations human rights experts on Friday condemned the excessive use of force during Chile’s ongoing street protests, and in a statement underscored that violence “can never be the answer to people’s social and political demands.

At least 20 people are reported to have been killed and about 1,600 injured, including police officers, during protests that began in early October over rising transport costs and inequality, that has become deeply entrenched in the Latin American country.

Throughout the weeks of demonstrations, the Human Rights Council-appointed independent experts have spoken out against the excessive force used by security forces.

The International Court of Justice (ICJ) has agreed to hear claims by Ukraine related to the conflict in the east of the country, where Government forces have been fighting mostly pro-Russian separatists, for more than five years.

In an application to the Court filed in January, Ukraine alleged that Russia had violated its obligations under two international treaties on terrorism financing and racial discrimination.

Russia responded in September by raising five preliminary objections concerning the Court’s jurisdiction and the admissibility of the application. The ICJ judges on Friday found the Court can entertain Ukraine’s claims under the International Convention for the Suppression of the Financing of Terrorism. 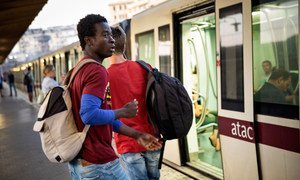 United Nations agencies on Friday highlighted the dire needs of thousands of unaccompanied and separated children who have arrived in Italy as refugees, lacking the proper support to transition through to adulthood.

Between 2014 and 2018, around 60,000 of them arrived in Italy by sea, 90 per cent of whom were between the ages of 15 and 17, according to a new report issued by the UN Children’s Fund (UNICEF), UN High Commissioner for Refugees (UNHCR) and the International Organization for Migration (IOM).

Listen to or download our audio News in Brief for 8 November on SoundCloud: