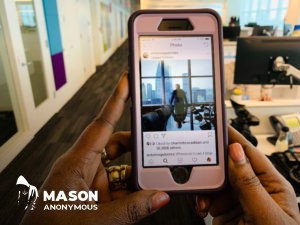 The move was an immediate success. In just five days, the UN chief’s new account has garnered over 32,000 followers; the highest number from the United States, followed by Mexico, India, Brazil and the United Kingdom.

The fast-growing Instagram platform is very popular with young audiences, as evidenced by the majority of followers so far, who are between the ages of 18 and 34.

“Looking out at this vibrant and diverse city, I remember all the villages and towns the world over, where I’ve heard people express the same, simple hope – for a life of dignity and security on a planet that is thriving”, he wrote next to the photo of him taking in the stunning view from his office. 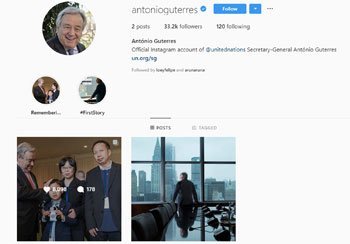 In a time where people are most influenced by those they trust and about whom they care, Instagram plays a key role in building that support for the UN and what it has to say.

Powered by strong visuals and messaging the launch of the @antonioguterres Instagram account was supported both inside and outside the UN system and has already measured high numbers of engagement and audience growth.

With over 20,000 engagements, or people who have responded to the Secretary-General’s content, his very first post went viral. What’s more, comments from followers have been overwhelmingly positive and supportive.

On this new platform, Mr. Guterres can share a personal, inside look into his work and the priorities of the Organization.

And his posts have already been noticed throughout cyberspace. Some of the UN agencies, Goodwill Ambassadors, Messengers of Peace, and other supporters who started following, have been spreading the word to their respective supporters to follow as well.

A case in point is UN environment’s Goodwill Ambassador Aidan Gallagher who encouraged his young and devoted fans to support the Secretary-General. This helped the UN chief kick off his account with exactly the youthful demographic he wants to hear the UN’s message.

And his ability to bring other major influencers on board has not waned. Malala, Leonardo DiCaprio and Yo-Yo Ma are just a small sample of the more than 60 celebrities following the UN chief. Moreover, he has amassed attention from over 20 Governments, non-governmental organizations (NGOs) and civil society accounts.