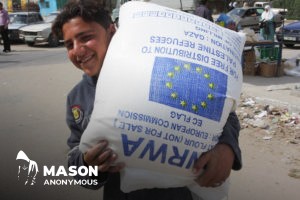 According to UNRWA, it must secure an additional $60 million by June to continue providing food to more than one million Palestine refugees in Gaza, including some 620,000 “abject poor” who cannot cover their basic food needs and are surviving on $1.6 per day. The funds are also needed to cover the severely challenged 390,000 “absolute poor”, who survive on about $3.5 per day.

UNRWA is funded almost entirely by voluntary contributions and financial support, which has been outpaced by growing needs.

More than one million refugees in the Gaza Strip – half its population – may not have enough food by June. Put food on the table for Palestine refugees in Gaza: https://t.co/xm6wVBVSdl https://t.co/rBVlLpBP8t

From fewer than 80,000 Palestine refugees in Gaza receiving social assistance in 2000, today over one million people need urgent food aid to get through their day.

“This is a near ten-fold increase caused by the blockade that led to the closure of Gaza and its disastrous impact on the local economy, the successive conflicts that razed entire neighborhoods and public infrastructure to the ground, and the ongoing internal Palestinian political crisis that started in 2007 with the arrival of Hamas to power in Gaza,” said Matthias Schmale, Director of UNRWA Operations in Gaza.

UNRWA is also confronted with an increased demand for services resulting from a growing number of registered Palestine refugees.

Moreover, the tragic death of 195 Palestinians – including 14 UNRWA students and the long-lasting physical and psychological injuries of 29,000 people during year-long demonstrations, known as the ‘Great March of Return’ – come after three devastating conflicts since 2009 that, combined, left at least 3,790 dead and more than 17,000 injured.

Today, with over 53 per cent of Gazans unemployed and more than one million dependent upon quarterly UNRWA food handouts, UN agencies and remittances from abroad are all that stand between Gaza and total collapse.

“For the first time in my year-and-a-half there,” Mr. Schmale elaborated, “I had three people talking to me separately about noticeably increasing drug abuse, increasing suicide attempts and prostitution and they put this down to the place is collapsing socially, in socio-economic terms and one can see it and of course against a background like that escalation is possible at any time”.

By continuing to deliver upon its mandate, UNRWA remains a critical lifeline for most of Gaza’s 1.9 million inhabitants, dispensing services in health and education and defending rights and dignity. Most urgent though, is the food assistance to more than one million Palestine refugees.

Operating with large financial shortfalls, as one of the few stabilizing elements in a very complex environment UNRWA is encouraging all Member States to work collectively to fund its programme budget as well as its emergency programmes, which are financed through separate funding portals.

UNRWA is tasked to help Palestine refugees in Jordan, Lebanon, Syria and the West Bank – including East Jerusalem and the Gaza Strip – to achieve their full human development potential.