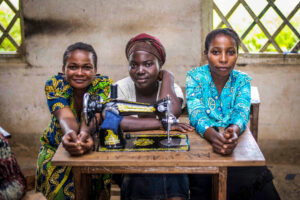 António Guterres made the appeal in a video message to the ‘Target Gender Equality LIVE’ event, held on Tuesday during the latest session of the UN Commission on the Status of Women (CSW).

Target Gender Equality is an initiative by the UN Global Compact, which supports businesses in adopting sustainable and socially responsible policies.

“The world needs the talents and perspectives of all women to solve our biggest challenges, from rebuilding the global economy to fighting systemic racism to tackling climate change”, the UN chief said.

As the Secretary-General pointed out, gender equality is essentially “a question of power”.  Whether in the public or private sector, men dominate.

“For the private sector, women’s equal participation and leadership is both a moral duty and a business imperative”, he said.

“When women have income and resources – including access to digital technology – they are more likely to invest in ways that benefit their families and communities. Experience also shows that businesses with women well represented on their corporate boards are more stable and profitable.”

Mr. Guterres noted that hundreds of companies are now implementing the Women’s Empowerment Principles launched by the UN Global Compact and UN Women in 2010.  He hoped thousands more will join them.

He stressed the need to act urgently, given the threat posed by the COVID-19 pandemic, whose impacts are affecting women worst of all.

“Backtracking on the path to gender equality is not just bad for women. It will undermine the resilience of entire economies and societies. And it will prevent the world from fulfilling the 2030 Agenda for Sustainable Development”, he warned.

The pandemic’s disproportionate impact on women also figured heavily in an address by the UN’s deputy chief, to another event hosted on Tuesday by the UN Global Compact.

Advancing gender equality in response to the crisis could add $13 trillion to global Gross Domestic Product by 2030, according to Deputy Secretary-General Amina Mohammed.

She said the UN’s Roadmap out of the pandemic advocates for a just and inclusive recovery, emphasizing the need for increased fiscal space and greater social protections for women.

“With targeted support, women-led businesses can play a major role in job creation and economic recovery, keeping households and businesses afloat”, Ms. Mohammed said, in a video message to the ‘Women Rise for All’ event.

“Given this immense potential, I am inspired to see women leaders unite to identify, support and finance women-led businesses and to protect vulnerable workers.”