“Unless we take action, the share of children leaving school in developing countries who are unable to read could increase from 53 to 70 per cent”, António Guterres warned in a video message marking the International Day of Education, on Monday.

The UN chief remembered the “chaos” that COVID-19 caused in education worldwide, noting that, at the pandemic’s peak, some 1.6 billion school and college students had their studies interrupted.

Despite the improvement, he believes the crisis is “not over yet”, and the turmoil goes beyond questions of access and inequality.

The theme for the day this year, is “Changing course, transforming education”.

For Mr. Guterres, the world is “changing at a dizzying pace, with technological innovation, unprecedented changes in the world of work, the onset of the climate emergency, and a widespread loss of trust between people and institutions.”

In this scenario, he believes conventional education systems are “struggling” to deliver the knowledge, skills and values needed to create a greener, better and safer future for all.

Because of these challenges, he is convening a Summit on Transforming Education in September.

“The time has come to reignite our collective commitment to education”, he said.

For him, that means “putting education at the heart of broader recovery efforts, aimed at transforming economies and societies and accelerating progress on sustainable development.”

It also means financial solidarity with developing countries and understanding how national education systems can be reformed, between now and 2030.

Mr. Guterres noted the Summit will be the first time that world leaders, young people and all education stakeholders come together to consider these fundamental questions. 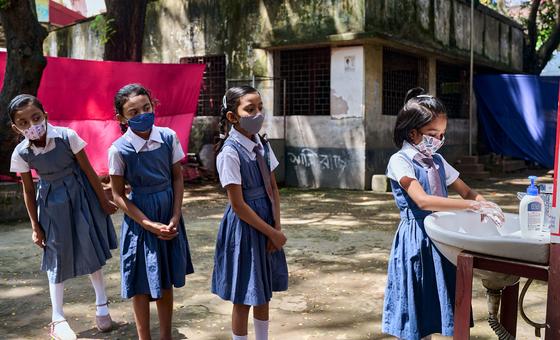 Students wash their hands at their school in Dhaka, Bangladesh., by © UNICEF/Bashir Ahmed Sujan

In a message, the President of the General Assembly, Abdulla Shahid, also stressed the need to reflect on the impact of two years of the COVID-19 pandemic.

Highlighting the challenges created for the empowerment of children and youth, Mr. Shahid mentioned a UN joint publication showing that students worldwide could lose a total of $17 trillion in lifetime earnings as a result of these constraints.

For him, this number is a call to close the digital divide, to empower girls and boys, in particular those in rural and isolated areas, and to strengthen support for persons living with disabilities, as well as other vulnerable groups.

“In a world of increasing complexity, uncertainty, and precarity, knowledge, education and learning need to be reimagined”, he argued.

“A system that advances, rather than subverts, our aspirations for inclusive education based on the principles of justice, equity and respect for human rights”, he concluded.

We’re at a turning point:

According to new data released by the UN Educational, Scientific and Cultural Organization (UNESCO) on Monday, schools are currently open in 135 countries, and in 25 nations, it has been temporarily suspended by extending the end-of-year break.

Only a dozen countries have opted to close schools and pivot to fully remote rather than in-person learning since the outbreak of the Omicron variant.

This is in stark contrast with the same period last year when most schools were closed, and learning was fully remote in 40 countries.

For the UN agency, this shows that a large majority of countries are using lessons from the past two years to keep classrooms accessible, with reinforced health and safety protocols.

“Education continues to be deeply disrupted by the pandemic, but all countries are now keenly aware of the dramatic costs of keeping schools closed as UNESCO said for the past two years”, said the agency’s Director-General, Audrey Azoulay.

A dozen countries surveyed – including Brazil, France, Kazakhstan, Mexico, Palestine and Ukraine – now use traffic light monitoring systems that trigger different measures according to levels of infection: mask wearing, hand washing, ventilation, but also indoor and outdoor distancing, and class closures on a case-by-case basis to avoid impacting all students.

Once again, UNESCO called for more efforts to vaccinate educators, noting teachers were not included in any priority group in up to a third of countries.

For the UNESCO chief, more action is needed to bring back to school all the children who have moved away from it and to recover learning losses.

“Without remedial action and focus on the most vulnerable students, the COVID-19 pandemic will carry dramatic long-term consequences”, Ms. Azoulay warned.

In fact, more than 50 per cent of teachers state that students had not progressed to the levels expected, according to a large-scale survey conducted by UNESCO and the International Association for the Evaluation of Educational Achievement.

In the study, conducted in 11 countries, most teachers agreed that it was difficult to provide necessary support for vulnerable students. And over 50 per cent of students said they were anxious about the changes taking place.