Updating the ambassadors on the latest UN report on protecting civilians in armed conflict, Ramesh Rajasingham, Director of the Coordination Division of the Office for the Coordination of Humanitarian Affairs (OCHA), said that hostilities in densely populated areas, “sharply” increased the risks of death and injury for civilians.

“When explosive weapons were used in populated areas, about 90 per cent of casualties were civilians, compared to 10 per cent in other areas”.

War damages and erodes critical infrastructure, by disrupting vital water, sanitation, electricity and health services, and puts education at risk – depriving hundreds of thousands of children of tuition, while rendering them vulnerable to forced recruitment, and other dangers.

“In the first nine months of last year, over 900 schools in Afghanistan were destroyed, damaged or closed and their rehabilitation hindered by explosive hazards,” he stated.

Conflict also damages the natural environment not just through fighting, but due to a lack of good governance and neglect.

“We are all too familiar with the cycle of violence and displacement, and 2021 was no exception,” said Mr. Rajasingham. “By midyear, fighting and insecurity had forcibly displaced 84 million people, with close to 51 million of them internally displaced”.

Meanwhile, the UN refugee agency (UNHCR) reported over the weekend that the Ukraine war and other conflicts have pushed the number of people forced to flee conflict, violence, human rights violations and persecution, to over 100 million, for the first time on record.

When civilians flee, they often left behind people with disabilities and those who manage to leave frequently confront difficulties in accessing assistance.

“More than one in five people living in conflict-affected areas were estimated to suffer from depression, anxiety and PTSD,” said the deputy humanitarian chief.

Medical workers, facilities, equipment and transport continued to come under attack, while parties to conflict interfered with medical care.

“In northern Ethiopia, healthcare facilities, equipment and transport were attacked and looted, and hospitals used for military purposes,” he elaborated.

And the pandemic has intensified human suffering and strained weakened healthcare services.

“Nearly three billion people are still waiting for their first vaccine, many of them in conflict situations where health systems are weak and public trust is low,” Mr. Rajasingham told the Council.

© UNICEF/UN0330643/Anmar
Children play in a neighbourhood ravaged by conflict in Iraq.

“When humanitarian activities were politicized, community acceptance was jeopardized,” detailed the OCHA chief. “Humanitarian staff were intimidated, arrested and detained while carrying out their functions.”

Last year, some 143 security incidents against humanitarian workers were recorded in 14 countries and territories affected by conflict, along with 93 humanitarian deaths.

Of those killed, injured or kidnapped, 98 per cent were national staff.

Hospitals, schools, homes, and shelters have come under attack, 12 million have been forced from their homes, and tens of thousands of civilians remained trapped and cut off from food, water and electricity.

“The prospect of nuclear conflict, once unthinkable, is now back within the realm of possibility,” said the Deputy Relief Coordinator.

Turning to the war’s impact on exports, he said that food, fuel and fertilizer prices have skyrocketed globally – with increases of up to 30 per cent for staple foods affecting people across Africa and the Middle East – “hitting the poorest people the hardest…and planting the seeds for further political instability and unrest worldwide.”

UNDP Ukraine/Oleksandr Ratushnia
A woman retrieves possessions from her bombed house in the village of Novoselivka, near Chernihiv, Ukraine.

Mr. Rajasingham underscored that all States and non-State actors must comply with international humanitarian law (IHL), including by avoiding explosive weapons with wide-area effects in populated areas.

He also upheld the need to integrate legal protections into military training, doctrine, and policy and legal frameworks.

“Parties to conflict and States must apply much greater political will and commitment to respect the rules of war,” concluded the senior UN official. 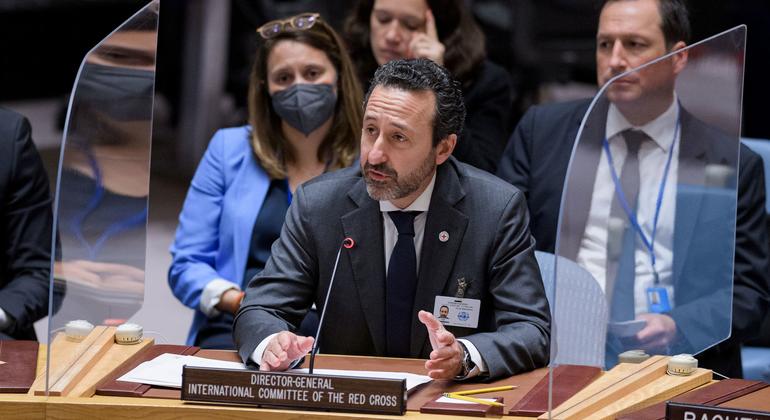 Director-General of the International Committee of the Red Cross (ICRC) Robert Mardini, reminded ambassadors that respect for IHL requires accountability and constructive dialogue with States and the various parties to conflict.

Humanitarian principles must never be compromised, he said.

Recalling that ICRC has been briefing the Council year after year on the plight of civilians, he argued that civilian protection should be made more of a strategic priority by States, in the planning and conduct of all military operations “in populated areas, which includes avoiding the use of heavy explosive weapons.”

David Miliband, President of the International Rescue Committee, and a former British Foreign Secretary, stressed that early warning mechanisms must not be allowed to “gather dust.”

“We see the constraints around this Council as well as in the conflict zones where we work.  But we also look to the wider international community to break the deadlock,” he said, advocating for the General Assembly to establish independent mechanisms to gather evidence on violations of international law.

Mr. Miliband also maintained the need for “new muscle” to prevent “the strangulation and weaponization of aid,” and more determination to uphold existing rights.

Click here to view the meeting in its entirety.