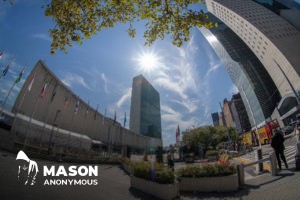 At a press conference at UN Headquarters in New York on Monday, UN Spokesperson Stephane Dujarric, in response to a question, told journalists that an investigation was necessary “to ensure full examination of and accountability for human rights violations committed in the case”.

Back in October 2018, the US-based columnist for the Washington Post went to the Saudi consulate in Turkey to pick up paperwork for his upcoming wedding. That was the last time he was seen, and his body has never been found.

“The Secretary-General also reiterates the UN’s commitment to ensuring freedom of expression and protection of journalists, as well as our longstanding opposition to the death penalty”, Mr. Dujarric continued, recalling “as a matter of principle” that the Organization continues to “stand against the death penalty”.

Meanwhile, on social media, an independent UN expert reacted to the decision of the Riyadh court, saying that the sentencing was “anything but justice” for the 59-year-old journalist.

Agnes Callamard, Special Rapporteur on extrajudicial, summary or arbitrary executions, said in a series of tweets that the trial was a “travesty of investigation, prosecution and justice”.

After the court rejected the findings of an inquiry she had conducted in June, and ruled that the killing was not premeditated, the independent expert tweeted that “a forensic doctor enrolled in the official killing team at least 24 hours before the crime” who discussed “dismemberment two hours before it actually occurred” shows that the murder “also clearly indicates planning”.

Ms. Callamard also noted  that the “18 Saudi officials, present on their own in the Saudi consulate in Istanbul for more than 10 days, cleaned up the crime scene,” and stated that this constitued an “obstruction of justice”.