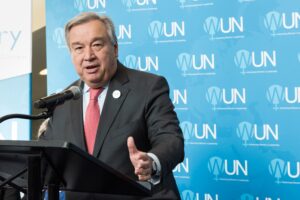 The office serves as the UN’s operational arm, dedicated to implementing projects for the Organization, international financial institutions, governments and other partners around the world.

“It has been my great privilege to lead UNOPS. I continue to be proud of UNOPS’ achievements and unprecedented growth over these last eight years,” Ms. Faremo said.

“I hope my decision will allow UNOPS to focus on its vital work uplifting the lives of vulnerable people around the world,” she added.

In December, Ms. Faremo placed the Chief Executive of the UNOPS Sustainable Investments in Infrastructure and Innovation initiative on administrative leave due to an investigation into possible misconduct.

UNOPS eagerly awaits the outcome of the probe underway by the UN Office of Internal Oversight Services (OIOS).

In a statement, UNOPS affirmed its commitment to working closely with the Secretary-General’s office during the transition, and said that it has already begun implementing continuity plans to ensure Ms. Faremo’s departure would not affect regular project activities.

Keeping the ship on course

While the Secretary-General launches a recruitment process – in consultation with the UNOPS Executive Board – to find a successor to Ms. Faremo, Mr. Wandel will take the reins, effective today.

Most recently serving as the UN Special Adviser on Reforms, the acting UNOPS chief will be granted all the necessary support for a smooth transition.

Prior to this appointment, he also served as the Secretary-General Designate for the COVID-19 Response and Recovery Fund.

Right for the job

Mr. Wandel has extensive experience working with international organizations with a focus on management, adaptive change and sustainable development.

He has also served as Director of the UN Development Programme Bureau for Management Services.

The Danish national holds a Master’s degree in political science and government from Aarhus University in Denmark.