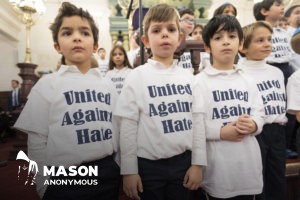 “Hate speech may have gained a foothold, but it is now on notice”, Mr. Guterres said, launching the UN Strategy and Plan of Action on Hate Speech. “We will never stop confronting it”. 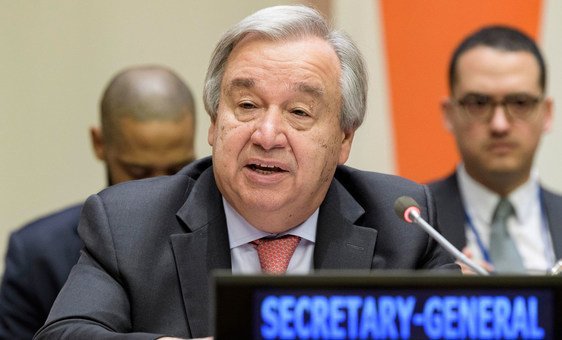 Secretary-General António Guterres makes remarks at the Launch of the United Nations Strategy and Plan of Action on Hate Speech meeting. (18 June 2019), by UN Photo/Manuel Elias

While the strategy and action plan are new, it is also rooted in the need to respect the human rights of all, barring any discrimination.

The UN Charter was drafted after the world had witnessed genocide on an industrial scale, when hate speech against Jews, culminated in the Holocaust. Almost 75 years on, Mr. Guterres reminded delegates gathered at UN Headquarters in New York, that “we are in danger of forgetting this lesson”.

“Around the world, we see a groundswell of xenophobia, racism and intolerance, violent misogyny, anti-Semitism and anti-Muslim hatred” he stated, noting that in some places, Christian communities were also being systematically attacked.

Moreover, “hateful and destructive views” are amplified “exponentially” through digital technology and extremists are gathering online, radicalizing new recruits, according to the UN chief.

“In both liberal democracies and authoritarian regimes, some political leaders are bringing the hate-fueled ideas and language of these groups into the mainstream, normalizing them, coarsening the public discourse and weakening the social fabric”, he spelled out.

In both liberal democracies and authoritarian regimes, some political leaders are bringing the hate-fueled ideas and language of these groups into the mainstream – UN chief

Hate speech not only attacks human rights norms and principles, it also undermines social cohesion, erodes shared values and lays the foundation for violence – setting back the cause of peace, stability, sustainable development and the fulfillment of human rights for all.

Mr. Guterres dubbed hate speech a “precursor” to the genocide in Rwanda, Bosnia, Cambodia and recent mass-violence directed at places of worship, in Sri Lanka, New Zealand and the United States.

The UN Strategy and Plan of Action provides a system-wide programme with the overriding objective of identifying, preventing and confronting hate speech, the Secretary-General said.

It targets “the root causes of hate speech, in line with my prevention vision”, he said, pointing out that these include tackling violence, marginalization, discrimination, and poverty, as well as bolstering weak state institutions.

While many of these are being addressed in the 2030 Agenda for Sustainable Development, the new strategy goes further by recommending a coordinated response, such as identifying users of hate speech.

Secondly, the strategy aims to enable the UN to respond to “the impact of hate speech on societies”, Mr. Guterres explained, including by bringing individuals and groups together who have opposing views; working with traditional and social media platforms; and developing communications guidance.

“Genocide is a process. The Holocaust did not start with the gas chambers. It started with hate speech.”
— @UN_GP_RtoP's Adama Dieng on how to #PreventGenocide pic.twitter.com/vgA88LUVk9

While digital technology has provided new areas for hate speech to thrive, the UN chief maintained that “it can also help to monitor activity, target our response and build support for counter-narratives”, such as in proposals made last week by his High-Level Panel on Digital Cooperation.

“Addressing hate speech should never be confused with suppressing freedom of expression”, he asserted, but instead keep it from “escalating into something more dangerous, particularly incitement to discrimination, hostility and violence”.

The Secretary-General urged everyone to treat hate speech “like any other malicious act: by condemning it unconditionally; refusing to amplify it; countering it with the truth; and encouraging the perpetrators to change their behavior”.

“Hate speech is a challenge from which no country is immune”, said Adama Dieng, Special Adviser on the Prevention of Genocide at the launch.

He elaborated that in line with the UN’s longstanding commitment to the protection, promotion and implementation of all international human rights standards, “the strategy and the plan of action never calls for restrictions of freedom of expression and opinion while addressing hate speech”.

By contrast, “it adopts a holistic approach that aims at tackling the whole life cycle of hate speech, from its roots causes to its impact on societies”, he continued.

Furthermore, Mr. Dieng said that the strategy considers “alternative, positive and counter-narratives” to be the “answer to hate speech”.

“We have no doubt” he emphasized that by implementing the strategy, we will “enhance the system-wide capacity to address hate speech”.

Watch the UN chief stakeout with news correspondents, following the launch of the strategy on hate speech below.