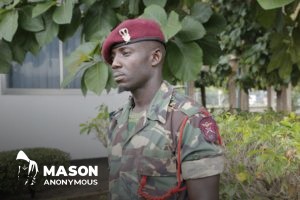 On Friday, Private Chitete’s brave and selfless action was commemorated at a ceremony held at UN headquarters in New York, when his family received the “Captain Mbaye Diagne Medal for Exceptional Courage,” the UN’s highest peacekeeping award, on his behalf.

Speaking exclusively to UN News’s Stella Vuzo on Friday, Tanzanian UN peacekeeper Corporal Omary recalled the deadly outcome of November 14, 2018. Along with Private Chitete, and other soldiers attached to the UN Mission in the Democratic Republic of Congo (DRC), he had been part of a military operation to dislodge armed fighters of the ADF militia in the east of the country, who had been attacking civilians and disrupting the UN’s efforts to halt the spread of the deadly Ebola virus.

Family of Private Chitete
Private Chitete was killed in November 2018, during an operation in the eastern part of the Democratic Republic of the Congo to combat the ADF.

“We received instructions to go to Naru camp in Kididiwe (eastern DRC). It was a joint operation with peacekeepers from Malawi. There was heavy fighting… I was shot in the leg. Thankfully for me, I was near Private Chitete, and he tied my leg with a bandage.”

Private Chitete administered lifesaving first-aid, and dragged Corporal Omary, who was pinned down and exposed to enemy fire, away to a less dangerous area: in doing so, he was shot and killed.

“Honestly, I feel bad,” said Corporal Omary, “because he was a fellow peacekeeper, and we were working together to carry out our duties. I wish it hadn’t ended that way, but it’s God’s will and I pray for him.”

Thanks to the actions of Private Chitete, described by UN chief António Guterres as “a true hero,” the peacekeepers were successful in dislodging the militia fighters from their stronghold, enabling the UN to continue working to eradicate Ebola from the region. “He personally made a difference,” said the Secretary-General, at a special ceremony in New York where the award was presented, “a profound one.”

For Corporal Omary, the experience has led him to reflect on his own role as a peacekeeper, and the importance of the often dangerous work that he and his colleagues carry out every day: “I have learned a lot: patience, collaboration, and to diligently carry out the responsibilities bestowed upon me by my country. The UN should continue aiding peacekeepers, give them support and highlight the good work that they do.”