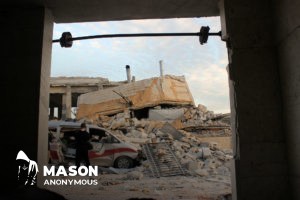 In a statement, the UN health agency said that the facilities included four hospitals and two primary health care centres “that were functional at the time they were hit”.

“Attacks on four facilities have been verified according to WHO reporting standards, and three are in process of verification,” WHO said in a statement.

“One primary health care center had been previously evacuated in advance of military action. At least two injuries were reported, and two facilities were destroyed.”

The attacks come amid increased hostilities in and around Syria’s Idlib province – the last opposition stronghold in the country, which has been devastated by more than eight years of war.

According to WHO, some 13.7 million people need health assistance in Syria, including an estimated four million in the north-west.

The UN agency says that the attacks happened between 28 and 30 August, the latest violence against civilians since fighting escalated in north-west Syria in late April.

In August alone, it reported that more than 130,000 people were displaced from Northern Hama and Idlib governorates.

Condemning the military escalation in an update to the Security Council in New York last Thursday, the UN Emergency Relief Coordinator, Mark Lowcock, said that more than 500 civilians had been killed and “many hundreds more injured” in the last four months.

Citing WHO and UNICEF, Mr. Lowcock noted that 43 health facilities, 87 educational facilities, 29 water stations, and seven markets had been impacted since April.

In an appeal to the belligerents to respect international humanitarian law, the UN official insisted that a UN-led probe – announced by the Secretary-General – were set to investigate incidents in north-west Syria “which damaged or destroyed facilities which have either been deconflicted or received humanitarian support” from the UN.

“I and other UN officials have repeatedly called on the parties and this Council to ensure respect for international humanitarian law,” Mr. Lowcock insisted.

“People’s homes, hospitals, schools, water systems and markets must be protected. There can be no reason, rationale, excuse or justification for the destruction of civilian areas on the scale seen in Idlib today,” he said.