“We will convene a series of Constitutional Committee meetings in March, May and June; and we will continue rolling out a set of consultations on step-for step within the wider issues…and on how we can make progress,” he said via teleconference.

#Syria Envoy @GeirOPedersen will update the @UN Security Council this morning on the latest developments in the political process in the country.

The UN official underscored that the full implementation of Security Council resolution 2585 – on humanitarian access in Syria – is important “not only on humanitarian grounds, but also in the context of building trust and confidence”.

Mr. Pedersen said that while front lines remain unshifted, “we still see all signs of an ongoing hot conflict”.

“Any of a number of flashpoints could ignite a broader conflagration,” he continued, drawing a grim picture of mutual shelling, skirmishes and security incidents across frontlines in the northwest, the northeast, and the southwest.

Internationally, drone strikes are being conducted in the north-east, Israeli strikes in the south and Damascus, and further security incidents on the Syrian-Jordanian border.

“And we have seen Security Council-listed terrorist groups active across Syria,” the UN envoy said, citing when a US ground operation killed the leader of ISIL, or in Arabic, Da’esh terrorist fighters.

Pushing through a stalemate

In the throes of acute suffering, Mr. Pedersen attested that “a political solution is the only way out.”

He reiterated the need for a Syrian-led, Syrian-owned political process that is supported by constructive international diplomacy, “however hard that is.”

The senior UN official announced that the seventh session of the Small Body of the UN-facilitated Constitutional Committee would be held in Geneva, on 21 March followed by future sessions in May and June to discuss a workplan.

“It is important that the Small Body’s work continues – and in such a manner that it builds trust and confidence,” he said, adding that as the parties’ positions are “substantively far apart…a sense of compromise and constructive engagement” is needed to yield results and continued progress.

In the meantime, Mr. Pedersen is conducting “a rolling process of consultations to identify how this might be done,” engaging with the Syrian parties and the Foreign Ministers of Jordan, Turkey and Russia.

He continues to facilitate the Constitutional Committee, seeking areas of consensus on a series of reciprocal confidence-building measures and exploring how a broader political process could be constructed

“I am asking interlocutors not only what they would demand, but also what they would be able to put on the table…to make progress, step-for step, on issues via commitments which are made with precision, which are verifiable, and which are implemented in parallel”, said the UN envoy.

The senior UN official apprised the Ambassadors of upcoming meetings, including with the Women’s Advisory Board in Switzerland from 14 to 21 March, and on Sunday in Geneva with Syrian civil society representatives.

Mr. Pedersen said that he looks forward to hearing their “feedback, suggestions and ideas”, and is “encouraged and inspired” to see their constructive engagement on “how to rebuild a Syrian society based on common civic values of independence, participation, plurality, transparency, dialogue and equality, despite their own life stories and diverse narratives.”

“I am convinced that the overwhelming majority of the Syrian people desperately want this conflict to end, to see some basic improvements to their shattered lives and to live in safety and dignity,” he spelled out.

In her first briefing to the Council as Deputy Emergency Relief Coordinator, Joyce Msuya, who also serves as Assistant Secretary-General for Humanitarian Affairs, cited a UN evidence-based assessment of the humanitarian needs in Syrian for the coming year.

The world is failing the people of Syria. This cannot be our strategy – Deputy Emergency Relief Coordinator

“The findings are clear. And they paint a very bleak picture,” she warned, saying that 14.6 million Syrians will depend on humanitarian assistance – nine per cent more than last year and 32 per cent higher than the year before.

“The world is failing the people of Syria. This cannot be our strategy”.

Turning to last month’s attack on a prison in Al Hasakah, she drew attention to “an incredibly precarious situation” for hundreds of children in detention centres and camps, who “should never have been there in the first place.”

“They need protection…services…and they need hope for the future. The time to act is long overdue,” upheld Ms. Msuya upheld. 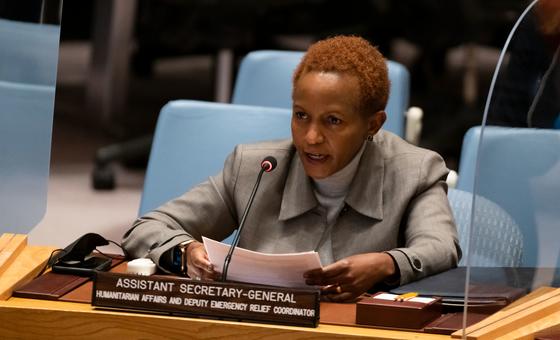 Syria ranks among the 10 most food insecure countries globally, with “a staggering 12 million people considered to be food insecure,” the Deputy Humanitarian Coordinator continued, while noting that the country’s economy is “spiraling further downward.”

“Food keeps getting more expensive, and people are going hungry,” she said, pointing out that the basic cost to feed a family of five for a month has almost doubled.

To get by, families borrow money without much hope of repaying it, burying them under an ever-increasing financial burden.

And children, mostly girls, are being pulled out of school while child marriages increase.

As the UN finalizes its 2022 Humanitarian Response Plan, Ms. Msuya expects that roughly one-quarter of the appeal will be geared towards increasing resilience and access to basic services – significantly higher than last year.

But, she underscored that more support was “critical”, including in enabling all concerned parties to go ahead with cross-line missions.

“Let me reiterate…there is no alternative in place now that can match the scale and scope of the massive United Nation’s cross-border operation, providing food, vaccines, and other vital aid to 2.4 million people,” the UN official spelled out.

In closing, Ms. Msuya stressed that long-suffering Syrians “deserve a better future” and should not need aid to survive.

“They need a chance to build a dignified life for themselves and their families. And they need to be able to give their children hope for a better future,” she stated, appealing for “sustainable and reliable access…[and] more funding”.

“And we need to scale up early recovery programming alongside our lifesaving work. But most importantly, Syrians need peace,” concluded the Deputy Emergency Relief Coordinator.