Beneath the brackish water are crawfish, small freshwater crustaceans which resemble lobsters, and before long they will be drawn into the cages, lured by fish scraps.

Heath Leger works for Chez Francois Seafood, a family crawfish business originally set up by his father and now run by his brother. “Today, I’m setting pots to catch the crawfish. Two thousand pots can be set in 120 acres and each pot can hold between three to six pounds, at least in the high season in the spring and early summer.”

Crawfish, says Heath Leger, which are locally referred to as “mud bugs,” did not use to be a delicacy and “only people in the swamp ate them.” But, now 40 years after his father got into the business, it’s a global billion-dollar industry.

Louisiana produces more than 90 per cent of all crawfish in the United States, and the industry makes more than $300 million annually, creating 7,000 direct and indirect jobs, according to the Louisiana Crawfish Promotion and Research Board.

It’s not an easy job, Heath Leger told UN News as he finished his shift planting pots. “It’s non-stop, sitting in that boat, driving with your feet; you’re doing five things at one time. 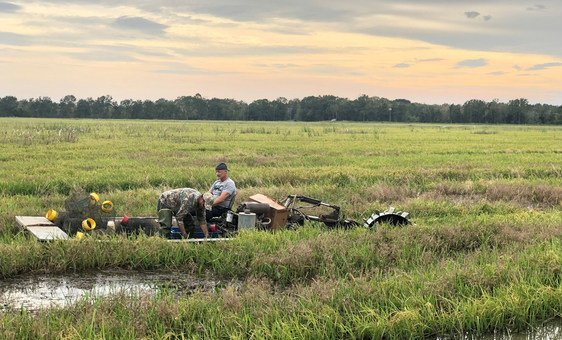 Crawfish pots are planted in a rice field in the Louisiana countryside. ILO Photo/Kevin Cassidy

It’s hot, there’s mosquitoes, it’s sweating, you’re messing with fish…it will chip away at you. It takes a special kind of person to do this job, it’s not for everyone. If you don’t like getting dirty this is not for you, I tell you that. I’ve seen myself up to my waist in mud already.”

However, there are rewards. “At the end of the day your dog-dead tired but you have a boat full of crawfish. To me it’s about providing a service and satisfying the customer, making someone smile.”

As Heath Leger packs up a catch of crawfish, lunch service is coming to an end at the Italian-flavoured Red Gravy café in New Orleans’ central business district, some 130 miles east of Scott.

The last orders of meatballs and shrimp and grits are being served but crawfish is not on the menu today. Chef and owner Roseann Rostoker takes a seat at a table at the front of the café and is brought tea by a member of her staff. Like Heath Leger, she understands the importance of keeping customers happy.

“What we do in the kitchen is a labour of love; if I get a bad review, I take it personally. Some days, I wake up and say, ‘I don’t want to play restaurant today’, but customers don’t care how I feel; they want their meatball or omelet. My job is to give it to them.” 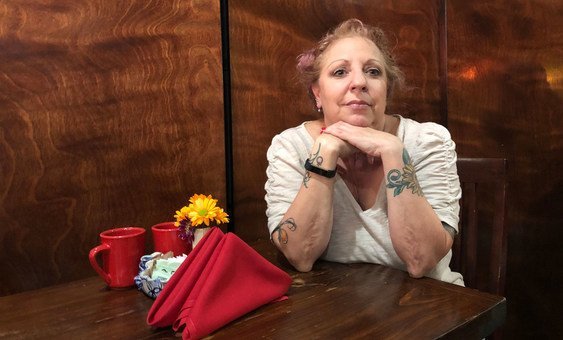 Both chef and crawfish farmer are working behind the scenes, playing significant but largely invisible roles in providing services to customers who they may never meet. These two American workers are also part of a photography project called “Dignity at Work: The American Experience”, which was launched by the International Labour Organization (ILO) on its 2019 centenary to document the working life of people across the United States.

Kevin Cassidy is the Director of the ILO’s office for the United States. “We wanted to show the humanity and the quiet dignity that people bring to their jobs every day. And we also wanted to make these ‘invisible’ jobs visible. People don’t think about the maintenance schedule of the jet engines on the plane they are flying in, or the conditions of work for the train engineer or the cleanliness of the restrooms at National Parks until there is a problem. There are hundreds of millions of people who get up everyday and are focused on doing a good job but are never recognized and remain invisible in plain sight. We pass them by without realizing they are there or what work means to them or the pride they put into their work.”

The ILO, a specialized United Nations agency, which focuses on advancing social justice and promoting decent work not just in the US but across the world, is leading UN efforts to answer how technology, demographic shifts, globalization and climate change will shape work in the future.

“Work connects us all to reality wherever we are in the world. Work is this unique entry point, this nexus where the social and economic connect. We are all part of the international globalized economy, but we are also all connected as people as families and communities”, the ILO’s Kevin Cassidy told UN News.

“A crawfish farmer is similar to a fisherman, whether that person is in Indonesia, Malaysia or Thailand, so there are people who do the same types of jobs in the US as in other parts of the world. They have the same challenges of being out on the water of trying to catch the fish. So, there is a connection between all these people.”

The project intends to photograph American workers from a wide cross-section of different industries in around 100 cities in 26 US states for the ILO’s Dignity at Work project. And despite the wide array of jobs in which they are engaged, Kevin Cassidy says they all are linked in one way or another.

“The people we have been speaking to are connected to the economy, connected to the community. They have a sense of how the world is changing and have been preparing not only themselves but also their children for those changes.”

Back at the crawfish farm in Scott, Heath Leger says he hopes the legacy created by his father will “carry on for generations”, adding that if his children wanted to go into the business, they could “take it to the next level”. That means spending more time in the office building the business and less time knee-deep in mud.