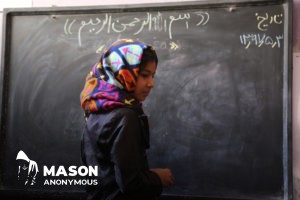 If you are a pupil in Afghanistan, then you were three times more likely to be affected by an attack in 2018 than you were the previous year. Attacks on schools in the country surged from 68 in 2017 to 192 in 2018, according to UNICEF. This is the first time that the number of school attacks has increased, since 2015.

“Education is under fire in Afghanistan,” said UNICEF Executive Director Henrietta Fore in a statement. “The senseless attacks on schools; the killing, injury and abduction of teachers; and the threats against education are destroying the hopes and dreams of an entire generation of children”.

One of the factors behind the increase was the use of schools as voter registration and polling centres for the parliamentary elections in 2018.

Education is under fire in Afghanistan – UNICEF chief, Henrietta Fore.

According to UNICEF, ongoing conflict and rapidly deteriorating security across the country have led to the closure of more than 1,000 schools as of December 2018. The consequences for over half a million children affected are extremely concerning and represent a denial of their fundamental right to education, and a brighter future.

An estimated 3.7 million children between the ages of 7 and 17 – nearly half of all school-aged Afghans  – are out of school in the country.

Worsening insecurity, high rates of poverty and persistent discrimination against girls caused the rate of out-of-school children to increase last year for the first time since 2002. Girls account for 60 per cent of children not in the education system.

UNICEF continues to work with the Government and other partners to provide informal and accelerated community-based education, including the provision of education in community buildings and homes, which is key in reducing the risk of attacks against children making their way to school on a daily basis.

On Monday, the third International Conference on Safe Schools opened in Spain for decision-makers to discuss the implementation of the Safe School Declaration – endorsed by 87 nations – its challenges and lessons learned, at the national, regional, and international levels.

Furthermore, the conference is an occasion to encourage cooperation and stronger gender-responsive practices.