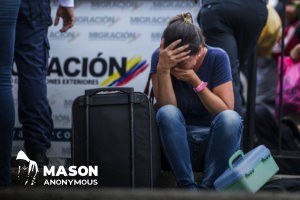 The High Commissioner for Human Rights arrived in the beleagured South American nation on Wednesday at the invitation of the Government of Nicolas Maduro, having expressed deep concern in an address to the Human Rights Council in March, over the country’s “dramatically” deteriorating rights situation overall, and the “continued criminalization of peaceful protest and dissent”.

Speaking to reporters on Friday night at the Maiquetia international airport, Ms. Bachelet – a former two-term president of Chile – said the Government had agreed the new OHCHR team would provide technical help and advice and “continue to monitor the human rights situation in Venezuela.”

This has been a short, but crucial, visit for me. In this time of grave economic, social and political crisis, I call for bold steps towards compromise, to set aside short-term wins for medium-term & long-term gains for all of #Venezuela 🇻🇪 – @mbachelet 👉 https://t.co/2Q0TeQ8dGy pic.twitter.com/HLVqdvNZ7H

“In my meetings with victims and their families, their deep yearning for justice for grave human rights violations was made painfully clear”, she said. “I sincerely hope that our assessment, advice and assistance will help strengthen torture prevention and access to justice in Venezuela. The Government has also agreed that my team will be guaranteed full access to detention centres to be able to monitor conditions and speak to detainees.”

She met President Maduro and other senior ministers, as well as the opposition leader, Juan Guaido, who declared himself interim president in January, sparking a deepening political crisis in the deeply divided country, which has now seen more than 4 million Venezuelans flee across the border.

“I also met victims of human rights violations and their families”, said Ms. Bachelet. “The man who told of his brother’s torture, humiliation and killing by hooded FAES security officers in a raid on his house – and the many other heartbroken families whose loved ones suffered a similar fate…The mother whose 14-year-old child was shot during demonstrations on 30 April this year. People who suffered horrific torture in detention.”

All had testified to “how astonishingly the humanitarian situation in Venezuela has deteriorated, including with regards to the rights to food, water, healthcare, education and other economic and social rights.”

Around 75 per cent of the national budget is now going on social programmes for all, she said, “however, we have heard from Venezuelans who are fully employed – many in the public sector – who have difficulty affording medicine and adequate food.”

The human rights chief said the health situation “continues to be extremely critical”, citing rising costs, lack of availability of medicines, and a rise now in teenage pregnancies, with maternal and newborn mortality rates also ticking up.

“I have called on the Government to ensure that essential data related to healthcare and other economic and social rights is made available to enable all actors to accurately assess and seek to adequately manage the situation”, she said.

Highlighting a recent strengthening of UN agencies on the ground, she said she had discussed the need to address the causes of the multiple crises, while also expressing concern at the crippling effect of sanctions imposed by the United States on oil exports, and gold trading, which “are exacerbating and aggravating the pre-existing economic crisis.”

She called on leaders “across the spectrum” to find a way to ease the suffering of the people: “The crises can only be resolved through the meaningful, sincere participation and inclusion of actors from various sectors of society.”

“The fate of more than 30 million Venezuelans rests upon the leadership’s willingness and ability to put the human rights of the people ahead of any personal, ideological or political ambitions”, she said, adding that she understood the mood of national scepticism, after years of decay and turmoil, that any political compromise is possible.

“Holding firmly to entrenched positions on either side will only escalate the crisis – and the people of Venezuela cannot afford further deterioration of the situation in the country” said Ms. Bachelet.

“I call for bold steps towards compromise, to set aside short-term wins for medium-term and long-term gains for the entire country”, she added, with reference to discussions between Government and opposition, underway in Norway. “The talks can succeed, as long as they are inclusive and those involved respond to the very real urgency to ensure their success.”