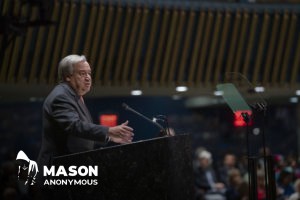 Presenting his annual report on the work of the UN, Secretary-General António Guterres told the overflowing Assembly Hall that a “great many people fear getting trampled, thwarted, left out and left behind”.

.@antonioguterres on the situation in the Gulf: In a context where a minor miscalculation can lead to a major confrontation, we must do everything possible to push for reason & restraint. #UNGA pic.twitter.com/r5HFiICNuR

And because people still believe in the UN, “we, the leaders, must deliver”, he underscored.

Apart from promising developments, such as peaceful elections in Madagascar and the Democratic Republic of the Congo; the Greece-North Macedonia name dispute resolution; political dialogue in Sudan; and an agreement in Syria, he spoke of persisting conflicts, terrorism and “the risk of a new arms race growing” across the world.

He lamented over unresolved situations in Yemen, Libya and Afghanistan; a threatened two-State solution between Israel and Palestine; Venezuelan displacements; and “the alarming possibility of armed conflict in the Gulf”.

The UN chief spoke about the importance of investing in peace through crisis prevention, mediation and diplomacy, saying that some 100,000 UN peacekeepers were currently protecting civilians and promoting peace.

And humanitarian workers ease suffering around the world.

“Fully half of all international relief aid is channeled through the United Nations – ensuring that millions receive protection, food, medicine, shelter, water and other life-saving assistance”, said Mr. Guterres, noting sadly that this “year alone…we have lost at least 80 peacekeepers, humanitarians and others, all of whom gave their lives trying to better the lives of others”.

The Secretary-General explained that the UN has bolstered its counter-terrorism architecture; defined new strategies to tackle violent extremism; embarked on a new disarmament agenda and stressed the need for strengthening disarmament treaties.

He expressed concern over “a new risk looming on the horizon”, elaborating on “the possibility of a great fracture: the world splitting in two, with the two largest economies on earth creating two separate and competing worlds, each with their own dominant currency, trade and financial rules, their own internet and artificial intelligence capacities, and their own zero sum geopolitical and military strategies”. 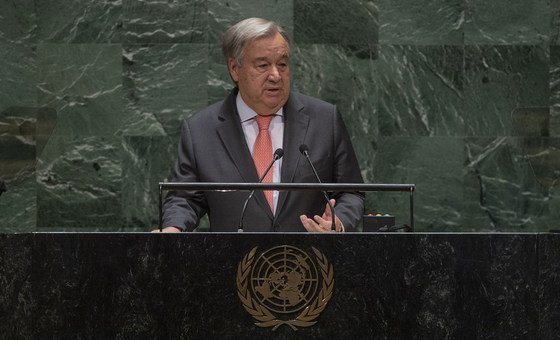 Secretary-General António Guterres presents his annual report on the work of the Organization ahead of the opening of the General Assembly’s 74th General Debate., by UN Photo/Cia Pak

“We must do everything possible to avert the Great Fracture and maintain a universal system…with strong multilateral institutions”, he stressed.

According to the UN chief, every measure to uphold security and human rights “helps deliver sustainable development and peace”.

“In the 21st century, we must see human rights with a vision that speaks to each and every human being and encompasses all rights”, he underscored, lauding the 2030 Agenda for Sustainable Development as a tool for social protection, a sustainable environment, education and decent jobs.

However, Mr. Guterres bemoaned, “we are not on track” and “inequality is exploding”.

“Our global economy generates great flows of income, but this prosperity is captured by a small number of elites” and that “a life free of want depends more on the circumstances of one’s birth than one’s innate capacities”.

He encouraged the world leaders at to take advantage of the Sustainable Development Goals Summit to “ramp up ambition”.

He referred to Hurricane Dorian in the Bahamas as he spoke of “unprecedented temperatures, unrelenting storms and undeniable science”.

Though “not fast enough”, the world is starting to move “in the right direction” – away from fossil fuels and towards a green economy.

Turning to fundamental freedoms, the UN chief said, “we are at a critical juncture where advances made across the decades are being restricted and reversed, misinterpreted and mistrusted”.

Mr. Guterres painted a picture of wide-ranging impunity; new forms of authoritarianism; narrowing civic spaces; the targeting of activists, human rights defenders and journalists; and expanding surveillance systems that are “shredding the fabric of our common humanity”. 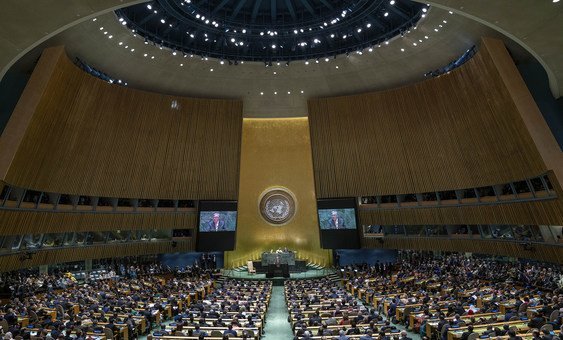 He elaborated that at a time when record numbers of refugees and internally displaced people are on the move, borders are being closed and families torn apart.

“We must reestablish the integrity of the international refugee protection regime and fulfil the promises of responsibility-sharing set out in the Global Compact on Refugees”, he asserted. “All migrants must see their human rights respected”.

At the same time, “alienation and distrust are being weaponized” he said with fear being “today’s best-selling brand”.

Spelling out, “diversity is a richness, never a threat”, the Secretary-General underscored that “religious, ethnic and other minorities must fully enjoy their human rights”.

“It is unacceptable in the 21st century for women and men to be persecuted because of their identity, belief or sexual orientation”, he stated, and, “the world’s most pervasive manifestation of discrimination affects fully half of humankind: women and girls”.

Mr. Guterres vowed to continue working toward gender parity at the UN and “full equality for women and girls” globally by “calling out a troubling commonality in terrorist attacks, extremist ideologies and brutal crimes” and stepping up efforts to expand opportunity.

The ever-more divided world needs “a strong United Nations” with human rights as its touchstone, he said, “let us restore trust, rebuild hope and move ahead, together”.