From shifting weather patterns that threaten food production, to rising sea levels that increase the risk of catastrophic flooding, the impacts of climate change are global in scope and unprecedented in scale. It is estimated that over 600 million Indians are likely to be impacted adversely by climate change if we don’t change course now.

Jaipur is the capital of the picturesque, almost magical Indian state of Rajasthan. It is known as the Pink City due to the colour of the stone used for many of its glorious palaces and historic monuments.

Acclaimed as the ‘greatest literary show on Earth’, the five-day Jaipur Literature festival attracts more than 400,000 book lovers; around 2,000 speakers addressing more than 200 sessions; and authors from 20 different countries. The books being discussed are penned in more than two dozen languages.

Questioned over whether the UN is doing enough to resolve the climate crisis, the UN’s Resident Coordinator in India, Renata Dessallien, quipped that the Organization could not act as a “global police” force.

“We are also not a global Government, so there are limits, to which the UN is mandated and on what it is able to do.”

“In fact”, she added, “we are pushing the limits on many fronts. The best way to describe the United Nations is that we are the ‘world persuader’ – persuading people to do what is fundamentally right.”

She lauded the UN’s pioneering role in the science relating to the impact of climate change, in the late 1980s, “when  a panel was established on climate change by the UN” known as the IPCC, which provides governments at all levels with trusted scientific information they can use to develop climate policies.

“So the science is out there and as an inter-governmental body we bring the nation states together to address the problem that’s staring us in the face, validated by the science.”

The session heard some startling stories of people living in India’s Ladakh region who are gravely affected by Climate crisis.

Solar Energy Innovator, Educationist and Managing Director of Himalayan Institute of Alternatives in Ladakh, Sonam Wangchuk said: “Up in the mountains, across the Himalayas, particularly in Ladakh, our glaciers are melting and while we always had water shortages, now we are seeing droughts in the spring season. 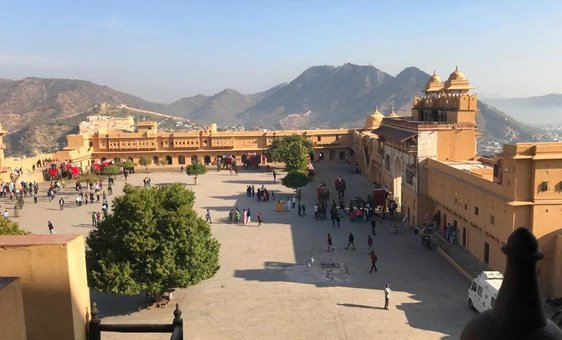 “I know at least two villages where people had to abandon the whole village due to water (shortages). These droughts are now accompanied by flash floods in autumn.”

In 2006, while volunteering in one such village that was washed away, leading to many deaths, he had asked villagers when the last flash flooding had occurred, but “they didn’t remember. The same village had another flash flood in 2010, then in 2015 and then another one in 2017. So it’s now becoming as frequent as that.”

He appealed to the people living in the plains and the cities to be responsible and “live simply” so that the people of the mountains in turn, can ‘simply live’.

Managing Editor of online journal PARI,  Namita Waikar, who is chronicling the stories of how vulnerable populations across India are being most affected by climate change for the upcoming UNDP Human Development Report, chimed in with other first-hand accounts of how life is being adversely affected in the coastal cities.

“In the rural areas, there are communities in Tamil Nadu where seaweed farmers are forced to change livelihoods due to fast disappearing seaweeds.

“Similarly, in places like Delhi, inland fishing communities are catching dead fish. What they told me was heart breaking.” Fisherman told her that if they lay the net at night, all they catch are the “freshest of the dead fish” in the morning. Keeping sewage and industrial waste out of rivers and coastal areas in an urgent priority, she said” “Another fisherwoman said that some of the fish they caught earlier are now only seen on the Discovery channel. That clearly explains the gravity of the situation.”

Writer, educator and filmmaker, Shubhangi Swarup, who is exploring ecology in her fiction, explained how she is integrating climate change themes into her work.

“Our stories have become human-centric, self-obsessed and obnoxious. We don’t have appreciation of nature and universe in our stories.

“So, I tried to write a novel where a geological fault line is the thread of the narrative. It begins with the Andaman (islands), goes to Myanmar, then Nepal and ends in Ladakh. While telling the story, I realised how ridiculous the political borders are when we are talking about solving local problems”, she said. 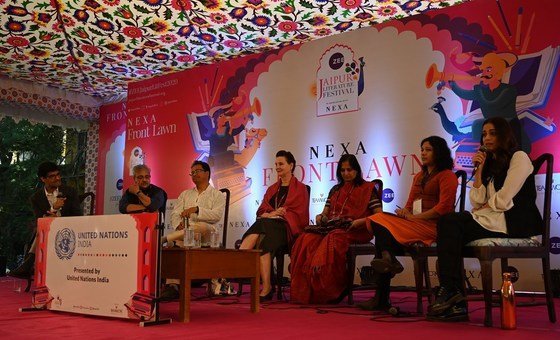 Civil Society Activist, Apoorva Oza, reiterated the need to take profit considerations out of the climate change debate: “There’s this excessive focus on measuring everything in economic terms. When I write a proposal they ask me whether I’ll double the farmers’ income. All I can tell you is that they will protect nature, they’ll sustain the environment, they’ll not over-exploit groundwater. But I can’t guarantee that I can double their incomes. I can only guarantee their progress.”

The session took a sombre turn when the famous Bollywood Actress and UN Advocate for Sustainable Development, Dia Mirza reached out to the audience and asked, “Do you have time? We just have a decade. Listen to women, listen to mothers, listen to children. And if you don’t understand science, just watch nature.”

The message was clear: everyone is responsible for creating a more environmentally sustainable world – And the arts and cultural sector is no exception.

As Moderator, Sameer Saran aptly concluded: “Since this festival is attended by the literati, stories come out of such places. If climate change becomes a part of these stories, we’ll be inspired to take better steps in mitigating climate change. Stories we tell about ourselves define our actions. And if our stories are green, then probably our future will also be green and prosperous.”