“The overall situation that I encountered in Nigeria gives rise to extreme concern”, with issues like poverty and climate change adding to the crisis, said Special Rapporteur Agnes Callamard after presenting a preliminary statement at the end of her 12-day mission.

She pointed out that if ignored, the ripple effects of unaccountability on such a large scale, had the potential to destabilize the sub-region if not the whole continent.

“Nigeria is confronting nationwide, regional and global pressures, such as population explosion, an increased number of people living in absolute poverty, climate change and desertification, and increasing proliferation of weapons”, she elaborated. “These are re-enforcing localized systems and country-wide patterns of violence, many of which are seemingly spinning out of control”.

Ms. Callamard highlighted many areas of concern, including armed conflict against the Boko Haram terrorist group in the northeast; insecurity and violence in the northwest; the conflict in the central area known as the Middle Belt and parts of the northwest and south, between nomadic Fulani herdsmen and indigenous farming communities. 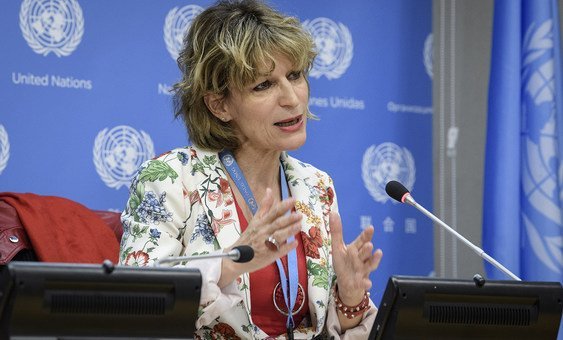 She also noted the prevalence of organized gangs or cults in Nigeria’s south; general repression of minority and indigenous groups; killings during evictions in slum areas; and widespread police brutality.

Some signs of improvement

The UN expert said there were some positive signs, including progress against the extremist Boko Haram group and affiliates, as well as a decline in allegations of arbitrary killings and deaths in custody at the hands of the military over the last two years.

However, she noted little progress in terms of accountability and reparations for grave human rights violations in the past.

“I particularly urge the Nigerian Government, and the international community, to prioritize as a matter of urgency, accountability and access to justice for all victims and addressing the conflicts between nomadic cattle breeding and farming communities, fueled by toxic narratives and the large availability of weapons”, she underscored.

While some high-profile cases of killings by police have resulted in the arrest and prosecution of the officers responsible and others involving clashes between Fulani herdsmen and indigenous farming communities have been investigated in Benue State, she flagged that “such examples of accountability remain the exception”.

“In almost all of the cases that were brought to my attention during the visit none of the perpetrators had been brought to justice”, lamented the Special Rapporteur.

“The loss of trust and confidence in public institutions prompts Nigerians to take matters of protection into their own hands, which is leading to a proliferation of self-protecting armed militia and cases of ‘jungle justice’”, she said.

Ms. Callamard called on the Nigerian authorities “to look carefully into my findings”, saying that she remains “available for further cooperation”.

During her mission, the UN envoy met Government officials, local authorities and civil society as well as family members whose relatives had been brutally killed and people forced from their homes. Among the cities on her itinerary were Abuja, Maiduguri, Makurdi, Jos, Port Harcourt and Lagos.

Special Rapporteurs are appointed by the Geneva-based UN Human Rights Council to examine and report back on the situation, which Ms. Callamard will do in June 2020.

The positions are honorary and receive no pay for their work.