Speaking in an exclusive interview with Alexandre Soares of UN News, Martina Donlon acknowledged that after two weeks of tough negotiations, the text that serves as the conference’s outcome is “a compromise that it is not enough”, especially for small island States and other vulnerable countries.

However, it does provide some “positive steps forward”.

Indeed, she said, with the agreement by negotiators at COP26 to begin moving away from fossil fuels, “we will see more electric cars and they will become more affordable, and increasingly powered by wind and solar energy”. 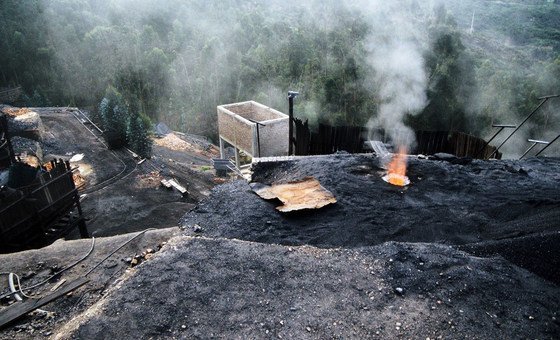 Ms. Donlon pointed out that at the conclusion of the conference, countries agreed to accelerate action during “this decisive decade” to cut global emissions in half, to reach the temperature goal of 1.5C, as outlined in the landmark 2015 Paris Agreement.

The COP26 outcome document, known as the Glasgow Climate Pact, also calls on 197 countries to present stronger national action plans for increasingly ambitious climate actions next year – moving up the 2025 deadline set out in the original timeline – at COP27, which is scheduled to take place in Egypt.

Moreover, Ms. Donlon noted that the pact calls for a phase down of coal and a phase out of fossil fuel subsidies, “two key issues that had never been explicitly mentioned in a decision at climate talks before – despite coal, oil and gas being the key drivers of global warming”.

According to the UN official, Glasgow signaled “an accelerated shift away from fossil fuels and towards renewable energy”.

The second most impactful outcome of the Glasgow pact is its call for the doubling of finance to support developing countries in adapting to the impacts of climate change.

“Although this will not provide all of the funding needed by poorer countries, the fact that developed countries agreed to double their collective funds for adaptation is a major improvement,” Ms. Donlon underscored.

She stressed that the UN Secretary-General has been pushing for increased financing to protect lives and livelihoods, and said that this would “especially benefit least developed countries and small island” States.

Unsplash/Patrick Federi
Burning fossil fuels emits a number of air pollutants that are harmful to both the environment and public health.

There were a host of other deals and announcements, such as on methane, coal, forests and sustainable transport that could all have very positive impacts if they are implemented, the UN official said.

“However, most of these are voluntary commitments so there are no guarantees that Governments, investors and corporations will deliver,” she said.

Ms. Donlon acknowledged that while there would not likely be an immediate impact in our daily lives, she stressed that the decisions taken at COP26 will affect Governmental actions on a range of measures and would eventually translate into noticeable differences in people’s lives.

And COP26 also sent a signal to markets that it is no longer acceptable to invest in heavily polluting sectors.

“So, these changes will have an impact on our lives, and probably sooner than we think,” she said.

The phasing out of coal means people in heavily polluted cities will have cleaner air to breath and fewer respiratory illnesses, the UN official explained.

Moreover, the increase in finance for protecting lives and livelihoods would allow small islands to put in place early warning systems for floods and storms.

And small farmers would have more resilient crops and seeds to protect food security.

See below for the full interview.

Want to know more? Check out our special events page, where you can find all our coverage of the COP26 climate summit, including stories and videos, explainers, podcasts and our newsletter.