“The Iraqi people have paid an unthinkable price to get their voices heard”, Special Representative of the Secretary-General, Jeanine Hennis-Plasschaert said in her address to the Council of Representatives in Baghdad.

She noted that since the start of the protests on 1 October, at least 319 people have been killed and around 15,000 injured, including both “peaceful protesters and members of the security forces”. 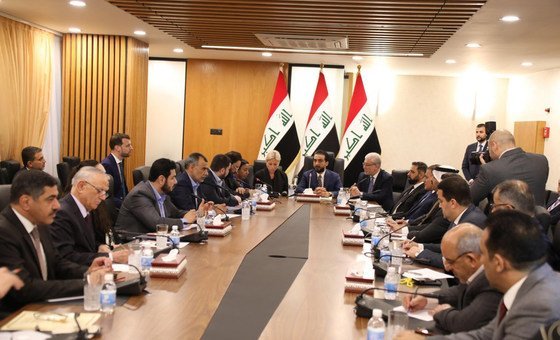 After a moment of silence for those who lost their lives or were injured, she stated that “while we commemorate the fallen, their ideals and demands remain the same”.

She pointed to a wide spectrum of concerns behind the demonstrations, ranging from an end to corruption to reliable public services as well as a broader reform of the political system, including amending the Constitution.

But “above all”, Ms. Hennis-Plasschaert maintained that “many, many Iraqis are asking for a brighter future” and for the country to reach its full potential for the benefit of all its citizens.

She recalled the words of some protesters she had met last week on the streets, lamenting “the loss of “brothers, our friends, our sons. A life in dignity and freedom…or no life”.

“Legitimate, genuine demands deserve meaningful responses and active engagement, both in this House and on the streets,” she added.

She reminded parliamentarians that, with full respect for Iraq’s sovereignty, the UN Assistance Mission in Iraq (UNAMI), which she heads, has proposed a number of concrete steps toward to confidence-building and reform.

Baghdad, 12 November 2019 – SRSG for Iraq, Ms. Jeanine Hennis-Plasschaert, met today with heads of Iraqi unions and syndicates. They discussed the current political situation in the country, including the ongoing demonstrations and possible solutions.

“UNAMI has actively reached out to a wide range of Iraqi parties, actors and authorities”, she attested, and yet “the harsh reality is that we continue to receive daily reports of new killings, new kidnappings, new arbitrary arrests, new beatings and new threats”.

“Violence only breeds violence” stressed the UN’s top official in Iraq: “It should stop, and it should stop now”.

“You are important in reaching out to the people, in making their voices heard, in moving forward on key reforms.”

Pointing out that nothing is more detrimental to public trust than “overpromising and underdelivering”, or more damaging than “a climate of anger and fear”, Ms. Hennis-Plasschaert emphasized that “now is the time to act, otherwise any momentum will be lost”.

Painting a picture of recent internet disruptions and even blanket shutdowns, she voiced that “unrestricted internet access” was “an essential right in today’s digital world”.

“What I witnessed on the streets in the past few days is an accumulation of frustration over the lack of progress in the last 16 years”, she flagged. “Out of love for their homeland, the many young people on the streets are expressing their hope for better times to come”.

She argued that these hopes call for forward thinking, and while private or partisan interests might be strategy, it is far from a solid one.

“The young people are asking for nothing more than a better future”, she advocated, maintaining that the Council was part of the solution. “The government cannot go it alone. It is a collective responsibility…for the whole political class”.

In closing, the Special Representative underlined her hope that the parliamentarians’ “choices, actions and statements will allay the fears of the Iraqi people…[and] restore their hope in a brighter future tomorrow”.