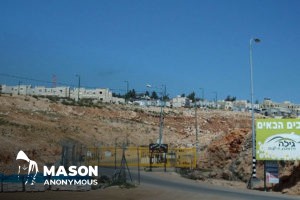 Regretting the United States’ announcement on Monday that it “no longer views settlements as inconsistent with international law”, Nickolay Mladenov told the 15-member Council that “the UN position remains unchanged”.

And he called the settlements “a major obstacle to the achievement of the two-State solution and a just, lasting and comprehensive peace”.

Upholding #UN resolutions and international law is just as important as preventing escalation and #war in #Gaza and paving the way for negotiations. https://t.co/4azDJt9i8r pic.twitter.com/Ic6raHTlQl

“Unilateral moves fuel anger and disillusionment and significantly undermine the prospects for establishing a contiguous and viable Palestinian State with Jerusalem as the future capital of both States”, he stressed.

Briefing ambassadors inside the chamber, the Special Coordinator noted that the Council was meeting just a few days after “the most serious recent escalation between Israel and Palestinian militants in Gaza”.

He acknowledged that the immediate crisis was diffused but maintained that “the situation remains highly volatile”.

Mr. Mladenov painted a picture of militant activity, rocket fire and retaliatory air-strikes that had claimed civilian lives on both sides.

Recognizing Egypt’s close collaboration with the UN in brokering a ceasefire, he reported that calm in Gaza was restored after 48 hours of hostilities, but added that “had our efforts failed, we would certainly be in the midst of another war that would be far worse than the terrible conflict in 2014”.

Flagging that “the dangers have not passed”, he reminded that indiscriminate rocket and mortar attacks against civilians are “unacceptable and must stop immediately”.

Turning to other risks, Mr. Mladenov cited Israeli border closures and intra-Palestinian division between various factions in Gaza, as feeding “a desperate reality”.

While over the past year and a half, the UN has taken steps to ease tensions and prevent escalation, he asserted, “they fall short in terms of financial resources, political commitment by Palestinian leaders, and measures by Israel”.

A lasting solution, must be political: “Israel cannot continue with its policy of closures that stifles development” he argued, and “Palestinian leaders cannot continue to avoid the devastating consequences of their internal political division”.

The Special Coordinator reminded the Council of its ultimate goal to help “Palestinians to develop freely, without relentless occupation, and Israelis to live in security, free from the fear of terror and rockets”.

Tanya Hary, Director of the Israeli human rights organization Gisha, Legal Center for Freedom of Movement, presented a sober analysis of the situation for Council members, sharing stories that illustrated the difficulties of living under Gaza restrictions.

She highlighted that “women are disproportionately affected” and maintained that it was incumbent upon the international community to allow “maximum access”, lift restrictions on goods and “catalyze peace” by reversing current trends.