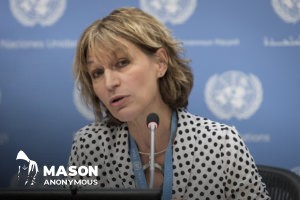 “Subsequently, I have undertaken far more work in the context and subsequences of the crimes, and in particular I have reviewed and analyzed the evidence collected in Turkey and elsewhere on the basis of international human rights law”, she said.

These findings are the basis of her 100-page report looking at the various forms of States’ responsibilities for Mr. Khashoggi’s murder.

The Special Rapproteur, appointed by the UN Human Rights Council, said the killing was not long in the planning, and yet, what was clear was that a mission of that nature “could not have been put in place from scratch in 48 hours,” indicating that those involved had been so for some time.

.@UN_SPExperts @AgnesCallamard is calling on the UN to set up an Int'l independent panel to determine 'individual responsibility' in the killing of Saudi journalist Jamal Khashoggi. pic.twitter.com/85vyBl3fNB

“During the 48 hours that preceded the killing of Mr. Khashoggi, there were several exchanges between the [Turkish] Consulate and Saudi Arabia regarding who should be part of that special mission, [and] what is should involve”, she explained.

Ms. Callamard said there were calls made to a farm owner outside Istanbul, and discussions on the hotel location for the 15-person team and on flights.

According to international human rights law, she maintained that the killing represents no less than six violations, making it an international crime.

In her report, she makes a range of recommendations, including on judicial responsibility, which she did not believe was the case in the Saudi trial.

“I call on an international criminal investigation to determine individual liabilities and to identify the best possible mechanisms for the delivery of this accountability”, she asserted, adding that the trial on Mr. Khashoggi’s death had failed to meet international procedural and substantive standards.

She stressed that she believed UN Secretary-General António Guterres has the prerogative and the mandate to appoint a panel of experts to determin individual responsibility for the kiling ‘and that’s what I’m calling on him to do now.”

There are 11 men indicted for their alleged connection to the murder, for which Ms. Callamard requested Saudi officials for access but received no response.

According to news reports, the Gulf Kingdom has tried the 11 unidentified people behind closed, seeking the death penalty for five of them.

She argued that the crime committed against Mr. Khashoggi was one of the State, calling it “an arbitrary and extrajudicial execution for which the State of Saudi Arabia is responsible”.

While there were individual sanctions, she upheld the, as “insufficient” because there were no “State-wide measures”.

The Special Rapporteur pointed out that judicial accountability for the crimes of Mr. Khashoggi “will be difficult” but insists that a trial is not the only way in which justice can be served – noting that it can be delivered symbolically, financially or politically.

She argued that “the most important step” that can “render homage to Mr. Khashoggi for what he stood and fought for” is for the international community to invest, particularly in the Middle East, heavily into “the protection and promotion” of freedom of the media, democratic values and human rights.

Ms. Callamard will deliver her report to the Human Rights Council on 26 June.