UN News asked Resident Coordinator, Valerie Julliand, about the situation in the country and what the rest of the world could learn from Indonesia’s experience.

What is the current situation in Indonesia? 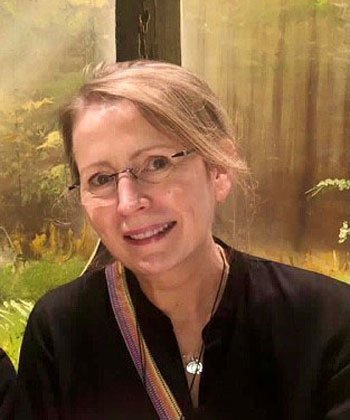 Indonesia, like many of countries in South East Asia, had until recently been successful in mitigating the worst health impacts of COVID-19; some form of physical distancing measures have long been in place.

Since taking up my post here in October 2020, I’ve only met most of my colleagues on screen and have almost entirely avoided Jakarta’s notorious traffic jams. Still, the non-health impacts of the pandemic are stark.

Indonesia has made remarkable progress in alleviating poverty over the past decade, but COVID-19 has set back some of those vital gains. As elsewhere, COVID-19’s economic burden has fallen disproportionately on women, and other marginalized groups.

Since May, however, the health crisis has become increasingly urgent. New COVID-19 cases have risen five-fold over the past month.

On July 17, Indonesia reported more new daily infections than both India and Brazil, causing multiple news outlets to dub it Asia’s new COVID-epicentre. And on July 21, the UN’s World Health Organization (WHO) said there had been more than 77,500 deaths in the country.

Indonesia’s total of some 3 million confirmed cases is still far below the more than 31 million India has recorded since the start of the pandemic.

But comparisons have inevitably been made with India’s tragic spring surge. In some areas, overflowing hospitals have been forced to turn away patients and volunteer groups have mobilized to locate oxygen tanks and build coffins.

How did things get so bad so quickly? 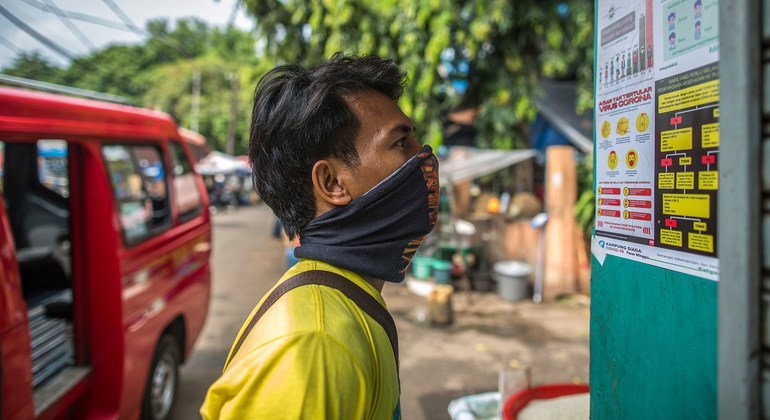 It’s down to several factors. The surge is being driven by the highly transmissible Delta variant and we’re also seeing rising case numbers across the region and in many other countries. But on a deeper level, there just hasn’t been a sense of collective wisdom during the pandemic.

The same oversights that occurred in one country were repeated in another. Global experience has demonstrated that strict enforcement of public health measures is critical to containing outbreaks, and that these measures must be guided by accurate surveillance of the transmission of the virus. That didn’t happen in India. What we are seeing here in Indonesia is also in part a result of mass gatherings and travel when the rate of infection was still high.

On top of that, vaccinations haven’t been rolled out quickly enough. As of July 17, six out of every hundred people among Indonesia’s population of 270 million had received two doses of COVID-19 vaccine, with low coverage among the elderly and other vulnerable groups.

Indonesia has secured a relatively good supply of vaccinations, including from the COVAX facility—which is supported by organizations such as WHO and UNICEF—and is ahead of other countries in the region.

But there has been a global lack of solidarity despite the UN Secretary-General’s calls for equitable vaccine access.

Rich countries hoarded vaccines. As sad as it is, Indonesia is certainly not the worst off; only 1.1 per cent of people in low-income countries have received at least one vaccination dose.

Is Indonesia’s outbreak at its peak or could things get worse?

It’s an alarming situation. After India implemented a total nationwide lockdown in response to the pandemic, it took approximately two weeks before we saw a reduction in cases.

Indonesia introduced strict curbs on movement in Java and Bali at the beginning of July, and has since expanded those curbs, but it has not yet implemented a stringent movement restriction or lockdown at a national level, as other countries in a similar situation have done. It is difficult to say when we will reach the peak, but the numbers are still rising.

Indonesia’s government has committed to vaccinating one-million people per day. It is also converting 40 per cent of non-COVID hospital beds into COVID beds. Among other interventions, the government is going to distribute medical support packages to some of the country’s poorest people, so those with milder symptoms do not have to go to hospital.

These measures are all important. But experience in other countries proves that total restrictions on movement, vaccination, contact tracing/testing and treatment are the best ways to contain the virus.

How is the UN supporting Indonesia’s COVID-19 response?

On the health side, the UN has been providing technical and operational support. The UN puts a lot of emphasis on prevention, so we help with testing capacity, both in terms of equipment, protocols and training.

We’ve facilitated the arrival of 16.2 million vaccine doses through the COVAX facility to date and we’re helping with their dissemination, because cold chain logistics are complex across an archipelago of 17,000 islands.

We also put a lot of energy in communications, including on health protocols and vaccines, and on combating misinformation and busting hoaxes. 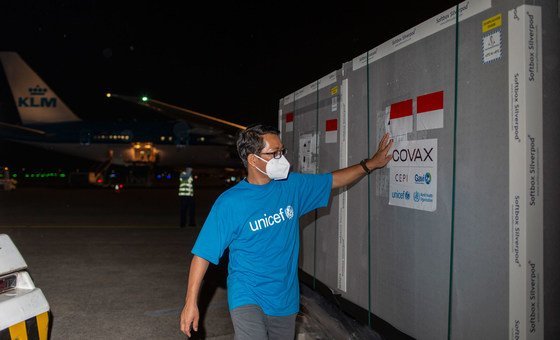 The first COVID-19 vaccines provided under the COVAX Facility arrived in Indonesia in March, 2021. © UNICEF/COVAX/Arimacs Wilander

Then there’s the work we are doing to support people who are affected by COVID-19 beyond the health sphere. That includes ensuring we also advise on the economic implications of the pandemic.

Many UN agencies are working with populations who are among the poorest in Indonesia. For example, we worked on the social protection package, and an adaptive version for disaster response, the government is offering, including ensuring people in remote areas can access the scheme.

UN Women has been raising awareness that COVID-19’s economic and social burden has fallen disproportionately on women, who manage about two thirds of Indonesia’s registered micro, small and medium sized enterprises (MSMEs); as well as responding to the rise in gender-based violence that has corresponded with lockdowns in Indonesia and everywhere else in the world.

IOM and UNHCR are working with local governments to ensure refugees are included in local vaccination programs.

UNICEF supports national efforts to address the immediate and longer-term effects of COVID-19 on children, such as ensuring continuation of learning, supporting social protection, and addressing child protection concerns and vulnerabilities.

What lessons can be learned globally from what is happening in Indonesia?

There are some issues that can be contained in a country. But when it comes to viruses, they don’t recognize borders, and they don’t differentiate between rich and poor countries.

If we make a little cocoon in which we feel safe but outside of that cocoon it’s chaos, then we are not going to be safe for a long time.

For me, this pandemic demonstrates what environmentalists have been arguing for decades: what we do in one country impacts what happens in another because we share one ecosystem, one planet.

There isn’t a single environmentalist that has managed to convince governments we should reduce air travel. Yet COVID-19 grounded global aviation!

The pandemic has forced us to work together, to limit ourselves, and to change how we live in ways that were unthinkable until only recently. But when it came to vaccines, although the COVAX facility has been working well, global solidarity has sometimes been lacking. I think that’s one of the reasons we see a situation like Indonesia’s.

It sounds like a UN cliché to say that we are all in this together. But it’s just so evident with COVID-19. The pandemic has taught us it is possible to make unprecedented changes in how we live. The question is are we going to implement the lessons we’ve paid such a high price to learn?