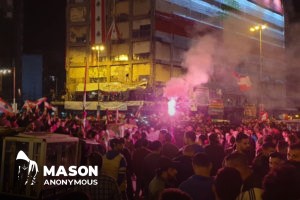 “Some demonstrators have resorted to using violence to express their grievances, and security forces have responded, at times, with unnecessary or disproportionate use of force”, rights office (OHCHR) Spokesperson, Marta Hurtado, told journalists on Tuesday in Geneva.

“We call on actors to do their utmost to de-escalate the situation and upon authorities to deploy efforts to establish a meaningful and inclusive dialogue with all segments of society”.

Prime Minister Saad Hariri resigned in October, less than two weeks after protests began over a worsening financial crisis, unemployment and widespread political corruption. Since then, politicians have been unable to agree a new government.

🇱🇧 #Lebanon: We are concerned by the increasing number of violent clashes between protesters & security forces in recent days. We call on all actors to do their utmost to de-escalate the situation & we urge the authorities to establish dialogue 👉 https://t.co/efPTpWyPWx pic.twitter.com/e0xhhLirQo

Over the weekend, protesters in Beirut reportedly attempted to overrun the Parliament building, throwing rocks and firecrackers at Internal Security Forces (ISF).

For their part, ISF officers responded with tear gas, water cannon and rubber bullets amidst reports of disproportionate use of force.

Citing “reliable sources”, the OHCHR spokesperson said that “at least four young men were shot at close range with rubber bullets leading to severe and irreversible damage to their eyes”.

Meanwhile, combined data from the Lebanese Red Cross and Civil Defence authorities, suggests that at least 377 people – 142 of whom were law enforcement officers – were injured on Saturday and another 90 on Sunday.

“Law enforcement officers have an obligation to abide by international norms and standards on the use of force, particularly the principles of legality and proportionality”, stated Ms. Hurtado.

OHCHR welcomed the statement by the ISF commander acknowledging the importance of acting with restraint when confronting violent protesters, and of the need to protect journalists and peaceful protesters.

“People have the right to participate in public affairs and shape all decisions that affect their lives, including by peacefully assembling to express their concerns”, spelled out Ms. Hurtado. “The rights to freedom of expression and opinion – including the right to give and receive information – to peaceful assembly and to participate are fundamental pillars of a democratic society”.

She added that “demonstrators should exercise this right peacefully and assemble without resorting to violence”.

Information received by the UN Human Rights Regional Office in the Middle East and North Africa indicates that 45 people were arrested over the weekend, most of whom have been released.

Some protesters said they were severely beaten during their arrest and subsequent interrogation.

“We also call on the authorities to conduct prompt, thorough, independent, transparent and impartial investigations into alleged use of force violations committed during the latest outbreaks of violence and ill-treatment during arrest and detention”.

Noting that victims and their families have “a right to justice, truth and reparations”, Ms. Hurtado concluded by encouraging political actors to “respond to the legitimate aspirations of the people”; to speed up efforts to form a stable, all-inclusive and respected Government able to address grievances; and listen to the demands of those suffering the effects of a severe and deepening economic crisis.

Six weeks after an enlarged International Support Group (ISG) meeting in Paris on 11 December, it met again in Beirut at the Ambassadorial level on Tuesday.

The ISG, which was launched in September 2013 and has brought together the UN, China, France, Germany, Italy, Russia, United Kingdom, United States, the European Union and the Arab League, noted with deep concern the ongoing absence of a functioning government.

And it expressed alarm over the situation that is increasingly marked by growing violence.

“The longer the absence of an effective and credible government capable to meet the aspirations expressed by all the Lebanese that will have the capacity and credibility to deliver the necessary substantive policy package of economic reforms, and that will be committed to disassociate the country from regional tensions and crisis, the more hardships the population will suffer, the more security risks and instability the country will face”, the ISG said in a statement.