It’s three o’clock in the afternoon at the Lunalilo Home, a residential and day care centre for elderly people nestling at the foot of a dormant volcano on the outskirts of Honolulu, the capital of the US state of Hawaii. Novena Sanchez, originally from the Philippines, busies herself looking after the kupuna, the Hawaiian term for older people, who have gathered in the home’s communal room for an afternoon of activities.

Ms. Sanchez came to the United States some 22 years ago after training as a nurse in the Philippines. During a break from work, she told UN News that she was always attracted to the nursing profession. “Since I was a young girl, whenever I went into a hospital or health centre, I would admire the nurses working there.”

From the Philippines to the US

She grew up in her home country in what she describes as a “hard way” and says she was “lucky” to come to the United States to live and work alongside her husband who had enlisted in the US navy.
She’s been working for several years at Lunalilo, which was established in 1883 following a bequest by High Chief William Lunalilo, a former King of the Hawaiian Islands.

Like many migrants, Ms. Sanchez brings useful skills and experience to her adopted country but says she has also sacrificed being away from her parents. Hers may be the typical migrant experience, sending money home to family in the Philippines while recognizing her “responsibilities” towards four children who were born in the United States.
Ms. Sanchez is not the only migrant worker employed at Lunalilo. She’s joined by colleagues from as far away as Uganda, Tonga and Ecuador. 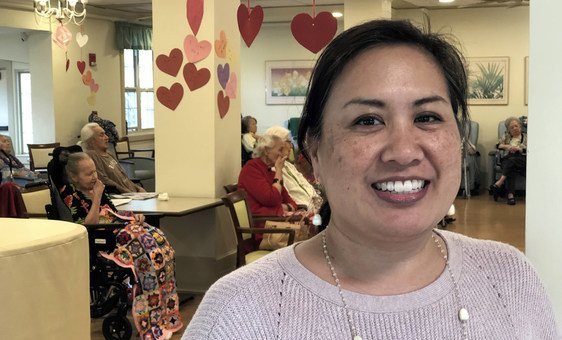 Diane Paloma is the CEO of Lunalilo Home in Honolulu, Hawaii., by UN News/Daniel Dickinson

And the CEO of Lunalilo homes, Diane Paloma, is herself the descendant of Japanese migrant workers who came four generations ago to work on Hawaii’s sugar cane plantations.

“Migrants have played a critical role in Hawaii and continue to do so, especially in the health care sector,” she told UN News in her office overlooking Lunalilo’s verdant tropical lawn and small kitchen garden.

“It’s good to have diversity in the workforce” she says. “We don’t want to have only one particular type of caregiver, so we welcome diversity and I personally love the different cultures that they bring to Lunalilo, especially the food!”

Hawaii’s indigenous culture is reflected strongly in the daily life of the Pacific island archipelago and its multicultural communities, most commonly through the greeting aloha, which means hello, but which also carries a deeper cultural and spiritual significance encompassing love, affection, peace, compassion and mercy.

Ms. Paloma recognizes that migrant workers often come with “different philosophical values. My challenge is, how can I teach somebody from another country, aloha and that compassion? It takes a little bit longer than if we had somebody who innately understands aloha and caring for kupuna, so employing a migrant can come with risks.”

The migration of health and other skilled workers from developing to developed countries is not a new phenomenon, but the World Health Organization [https://www.who.int/hrh/migration/en/] says it is on the rise. Over the last decade, there has been a 60 per cent increase in migrant doctors and nurses working in the world’s wealthiest countries.

And while that may be good news for healthcare in those developed countries, poorer countries are often losing skilled workers either on a permanent or semi-permanent basis. The brain-drain of skilled workers means that the target of providing universal health coverage, a key aim of the Sustainable Development Goal 3 (SDG 3) which focuses on Good Health and Well-Being may be more difficult to reach.

According to the International Labour Organization, the UN’s work-focused agency, some 2.1 billion people were in need of health care services in 2015; by 2030, this number is expected to reach 2.3 billion, driven by an additional 200 million older persons and children.

Speaking in Hawaii, Kevin Cassidy, the Director of the ILO’s office for the United States said that “sweeping changes in policies should address the rising need for care,” adding that “investment in the care economy should be an explicit objective of employment, macroeconomic, sectoral, internal and international labour migration and social protection policies,” leading to “decent work outcomes for migrant and national workers.”

Back at Lunalilo home, Novena Sanchez is showing a younger Hawaiian member of staff the best technique for helping kupuna to support their breathing using an oxygen tank. “I’m proud and confident of what I do and I’m always willing to help my colleagues.” They understand the advice she provides has come from years of experience. It’s unlikely, right now, that she will take these skills back to the Philippines, recognizing that she may only return to the country of her birth when she eventually retires.