“Health is the new wealth,” António Vitorino insisted, citing proposals by some countries to introduce so-called immunity passports and use mobile phone apps that are designed to prevent the spread of new coronavirus.

“In lots of countries in the world, we already have a system of screening checks to identify the health of migrants, above all malaria, tuberculosis…HIV-AIDS, and now I believe that there will be increased demands in health controls for regular migrants,” he said.

Already, travel restrictions to try to limit the spread of the pandemic had left people on the move more vulnerable than ever and unable to work to support themselves, Mr. Vitorino told journalists via videoconference.

“There are thousands of stranded migrants all over the world,” he said. “In South-East Asia, in East Africa, in Latin America, because of the closing of the borders and with the travel restrictions, lots of migrants who were on the move; some of them wanted to return precisely because of the pandemic.” 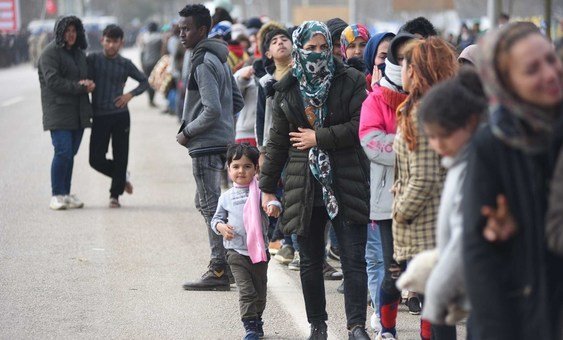 Refugees and migrants gather at the Pazarkule border crossing near Edirne, Turkey, hoping to cross over into Greece., by © UNICEF/Özgür Ölçer

He added: They are blocked, some in large groups, some in small groups, in the border areas, in very difficult conditions, without access to minimal care, especially health screening….We have been asking the Governments to allow the humanitarian workers and the health workers to have access to (them).”

Turning to Venezuelan migrants, who are believed to number around five million amid a worsening economic crisis in the country, the IOM chief explained that “thousands…have lost their jobs in countries like Ecuador and Colombia and are returning back to Venezuela in large crowds without any health screening and being quarantined when they go back.”

In a statement, IOM highlighted the plight of migrants left stranded in the desert in west, central, and eastern Africa, either after having been deported without due process, or abandoned by smugglers.

To help them, agency teams continue to conduct search and rescue in the desert, provide shelter, health assistance and support to hundreds of stranded migrants every week.

IOM’s immediate priorities for migrants include ensuring that they have access to health care and other basic social welfare assistance in their host country.

Among the UN agency’s other immediate concerns is preventing the spread of new coronavirus infection in the more than 1,100 camps that it manages across the world.

They include the Cox’s Bazar complex in Bangladesh, home to around one million mainly ethnic Rohingya from Myanmar, the majority having fled persecution that was likened to ethnic cleansing by former top UN rights official Zeid Ra’ad Al Hussein.

So far, no cases of infection have been reported there, the IOM chief said, adding that preventative measures had been communicated to hundreds of thousands of camp residents, while medical capacity has been boosted.

On the situation of migrants in camps on the Greek mainland – IOM does not work on the islands which are home to migrants and refugees crossing the Eastern Mediterranean waters from Turkey – Mr. Vitorino said that some 200 cases of infection had been identified.

He described social distancing measures as “unthinkable” and added that “access to water and sanitation is quite a challenge”.

Allowing hate speech and xenophobic narratives to thrive unchallenged also threatens to undermine the public health response to COVID-19, he said, before noting that migrant workers make up a significant percentage of the health sector in many developed countries including the UK, the U.S. and Switzerland. 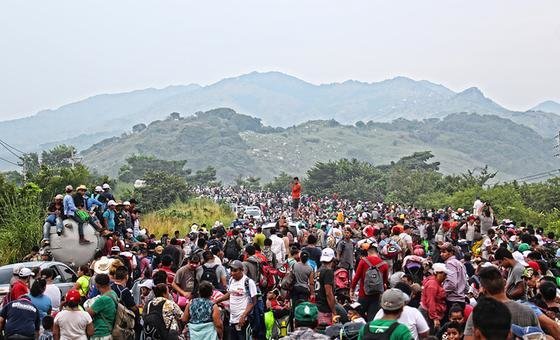 Remittances have already seen a 30pc drop during the pandemic, Mr Vitorino said, citing World Bank data, meaning that some $20 billion has not been sent home to families in countries where up to 15 per cent of their gross domestic product comes from pay packets earned abroad.

In a plea for the health of migrants to be given as much attention as that of host populations in all countries, Mr. Vitorino also noted that Governments which did not monitor them, risked having to resume lockdown measures.

Mr. Vitorino added: “It is quite clear that health is the new wealth and that health concerns will be introduced in the mobility systems – not just for migration – but as a whole; where travelling for business or professional reasons, health will be the new gamechanger in town.”

“If the current pandemic leads to a two or even three-tier mobility system, then we will have to tried to solve the problem – the problem of the pandemic – but at the same time we have created a new problem of deepening the inequalities.”

Part of IOM’s core work is to voluntarily repatriate migrants in difficulty, including those affected by the pandemic. To do so, the agency seeks funding and works in partnership with Governments which ask for assistance.

“We have requests from a number of countries in the region to help repatriating those migrants to their countries of origin, whether it is Mozambique or Malawi, Zimbabwe, Nigeria,” Mr. Vitorino said. “As you know, IOM works very much on the basis of projects, so we do not have the financial capacity to help countries to repatriate their citizens unless there is funding available to do that.”