There are also reports that 174 people have died or are missing.

Storm Molave, which made landfall at around 11 am local time on Wednesday, is one of the strongest storms to hit the southeast Asian nation in 20 years.

The resulting “extreme rainfall” could continue over the coming days, worsening the already precarious situation faced by many families, the UN Children’s Fund (UNICEF) said in a statement.

“For the affected populations, their homes remain severely damaged, their food stocks have been lost, they have no access to clean water for drinking, washing and cooking; and water and sanitation systems have been damaged,” said the agency.

Thousands have been moved to evacuation centres, which are themselves flooded, resulting in difficult health and hygiene conditions for the displaced people, primarily women, children and elderly. Health centres have also been damaged, leaving without to access basic health care services. 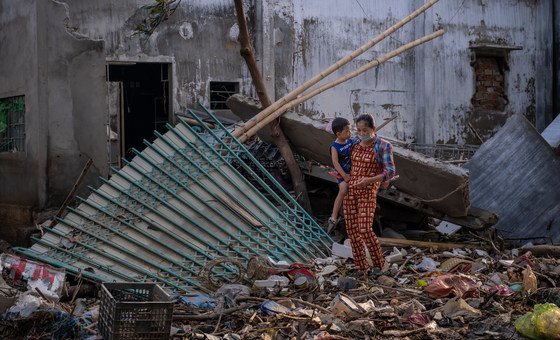 UNICEF/Pham/AFP-Services | A woman carries her child as she walks past the ruins
of a house destroyed by recent floods central Viet Nam. (October 2020)​

“Added to this is the trauma of the violent storms and rushing waters, that for a population where many cannot swim, creates fear and impacts mental wellbeing,” UNICEF added.

The storm has also damaged vital infrastructure, including electricity and roads, leaving many communities cut off from assistance and protection.

An estimated 7.7 million people live in the affected areas, including as many as 1.5 million who have been “directly affected”, the Office of the UN Resident Coordinator in Viet Nam said in a humanitarian  update late Wednesday.

Of these, some 177,000 people considered vulnerable (poor or near-poor), should be prioritized for urgent humanitarian assistance, it added.

According to the Resident Coordinator’s Office, UN agencies and partners are developing and will release a multi-sector response plan, within the coming days, to support emergency relief efforts.

In the immediate term, UNICEF has mobilized to provide emergency water, nutrition, sanitation, education and protection support, it said in the statement. It is also coordinating with Government agencies and humanitarian actors to reach the most vulnerable and those most affected.

The Vietnamese army has also deployed troops and vehicles for search and rescue missions.