Since 24 February, over 450,000 refugees have crossed the Ukraine border, and about a hundred thousand have temporarily settled in with Moldova’s four million people.

From Odessa, Natalia and her one-year-old daughter currently live at the exhibition complex MoldExpo, which has been transform into a refugee centre.

“I was offered to go to Europe, to France,” says the 34-year-old mother. “But I don’t want to go that far. I hope everything will be over and I will be able to return home”.

When the war first began, one couldn’t squeeze into the extensive territory of the roomy pavilions.

“There wasn’t a single free square meter, I’ve never seen anything like that in my life, and people just kept coming,” said Svetlana, an interpreter who works with the UN and other organizations, helping them to communicate with the local population and refugees.

“Residents of Moldova started raising funds right away and literally stuffed the Exposition Centre with various belongings, they kept bringing stuff over,” she continued. “My friend, an attorney, temporarily moved closer to the border to provide legal advice to the new arrivals. And there are hundreds of people like her”.

Today the MoldExpo complex, which until recently had been used as a COVID hospital, houses 360 refugees, and during the first days it kept up to 1,200 people overnight.

The exhibition centre has been transformed into a transit hub where people, exhausted by the dangerous journey and madness of war, get a roof over their heads, a hot meal, legal advice and, most importantly, human sympathy.

It offers residents a little rest to determine where and how to go from here.

There are always long lines at the Ukrainian Embassy in Moldova. The staff are overworked, making it difficult for those who quickly fled to replace any documents they may have lost or left behind.

“We are gypsies from the Dnieper,” one woman said in response to our greeting. “I have a daughter in Germany, but we cannot join her there because we don’t have the IDs, and it takes time to replace them”.

For now, she lives with her sisters and daughters in a small cubicle in MoldExpo – with hopes of making it to Germany.

At MoldExpo, UN employees, civil-society organizations and volunteers work around the clock.

The UN organized so-called “blue dots” for families with children and UNFPA provides an “Orange Safe Space” for the specific needs of girls and women.

And some people need medications and other forms of medical assistance.

In the “Orange Safe Space”, refugees are instructed how avoid the nets that are skillfully set up by human traffickers.

Natalia said that it is hard for her to control her emotions when looking at people who lost everything in an instant.

“I had this case that left me shaken for two or three days,” she said, recounting the story of a 75-year-old former university professor in Kharkiv.

The woman’s son is in the military, her daughter and daughter-in-law are doctors, and her son-in-law a police officer.

Duty-bound, none of them could leave Ukraine, so the elderly woman had to bring her five grandchildren – ages 4 to 14 – to safety on her own.

“She couldn’t stop crying”, Natalia continued. “She has been calling them for two days, and all the phones are disconnected; she is afraid that something happened to them, Kharkiv being shelled all the time. Everyone at our centre was consoling her, we tried to reach them one our phones and to distract the kids with candies”.

Fortunately, a few days later it turned out that all four were alive, there was just no connection. 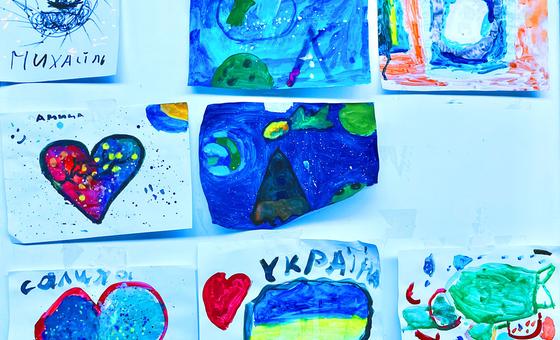 As tens of thousands of people receive economic assistance from the UN agencies, the MoldExpo also hosts a centre for financial aid.

“People are embarrassed to accept money, but they are simply compelled to do it,” said Natalia, who works at the UN centre for material assistance.

“We often hear, ‘don’t get a wrong idea, we had everything over there, we wanted for nothing’. Many of them offer to work as volunteers and ask how they could help”.

A lump-sum financial package that amounts to approximately $190 is extended to families who take in refugees for at least a week. But is it really about the money?

At age 73, Margarita Yevgenievna has no plans to retire as an elementary-school teacher yet.

She shares her small two-room apartment with refugees.

“The three people from Odessa are in one room, and I am in the other. Until the war is over, they’ll be living at my place,” she said, adding, “I also have three children from Ukraine in my class”.

UN News
Refugee camp in Palanka, Maldova, on the border with Ukraine.

The flow of refugees has by now receded significantly, but not dried out.

About a two-hour drive from Chisinau, UN agencies and the Moldovan Government set up a tent camp at the Ukrainian border.

There the refugees can rest or spend the night, depending on bus schedules that would take them further into the city or to Romania.

“We weren’t even expecting such a reception, we were proceeding at random, it’s just that it was too scary to stay,” said Irina, who just arrived with her son from Odessa. “We are really grateful to Moldova and the UN”.

At Chisinau airport, on the wall between the passport-control booths, one can read the following words:

“Moldova is a small country with a big heart”.

The UN chief will soon arrive to support the refugees and personally thank the Moldovans and all who assist them.