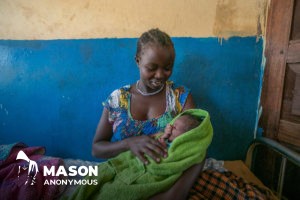 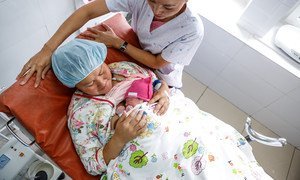 Pregnant women are putting their lives and their babies at risk because of “catastrophic” and prohibitive healthcare costs before, during and after childbirth, UNICEF said on Monday.

In a new report highlighting how few of the world’s poorest pregnant women have a doctor, nurse of midwife at their side when they need them most, the UN Children’s Fund said that more than 800 women die every day from complications, while many more mothers live with “debilitating” outcomes.

Security forces in Sudan fired on pro-democracy protesters in the capital Khartoum on Monday, leaving a number of dead and many more injured, prompting the United Nations chief’s condemnation and an appeal for “peaceful dialogue” to resume.

Secretary-General António Guterres “strongly condemns the violence” and “the use of force to disperse the protestors at the sit-in site”, said a statement issued by his Spokesperson, adding he was also alarmed at reports that “security forces have opened fire inside medical facilities”. 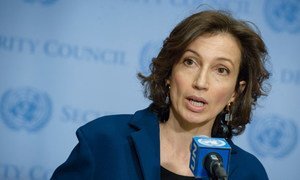 In Chad, the killing of reporter Obed Nangbatna brings to 19 the number of journalists killed around the world so far in 2019.

Mr. Nangbatna, who was 42, worked for public broadcaster Télé Tchad; he was fatally wounded when the military convoy he was with hit a landmine which also killed four soldiers late last month. He was reportedly travelling to the northern side of Lake Chad to cover the aftermath of an attack on army positions by Nangbatna extremists.

In a statement condemning the attack, Director-General of UNESCO, Audrey Azoulay appealed for better safety for journalists in conflict situations including the Lake Chad region, and for safety protocols to be “fully respected”.

An original take on the issue of sustainability: an art exhibition that’s been inspired by the 2030 Agenda and the 17 Goals that the international community adopted in 2015.

Installed temporarily in the UN Palace of Nations by the Mission of Canada, “Awakening” features deceptively complicated works by Canadian and indigenous artists. One of them is a large photograph of a huge open copper mine, with a seemingly beautiful turquoise lake at the bottom.

It’s actually a toxic “tailing pond” that’s full of chemicals and other mining byproducts, as Tara Lapont from the Canada Council for the Arts explains: “What strikes you in this work is that it’s beautiful to look at it, you see colour variation and texture… but when you realize what you’re looking at – in this case a copper mine from Utah – you also realize this is the impact of man, scraping away at the natural landscape for its own purposes, and that gorgeous pool of green is in fact a tailing pond, so not really so beautiful but something rather dangerous to us.”

Accompanying the exhibition is a series of essays underscoring the urgency of achieving each of the Sustainable Development Goals, written by leading international figures including UN Deputy chief Amina Mohammed and the former head of the World Bank, Jim Yong Kim. 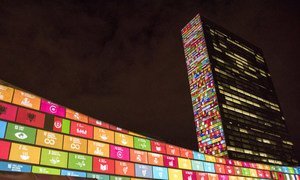 When it comes to achieving the 2030 Agenda for Sustainable Development, Deputy Secretary-General Amina J. Mohammed, sounded the alarm: “The world is simply not going far enough fast enough,” she said on Monday during a visit in London to meet various change-making organizations, and galvanize momentum towards the fulfilment of the 17 Sustainable Development Goals.

Among a long list of global shortcomings, Ms. Mohammed cited that “extreme poverty is not on track for elimination by 2030; hunger is on the rise for the third consecutive year; wildlife is being lost at an alarming rate with around one million species already facing extinction; disadvantaged population groups remain largely excluded; youth are three times more likely to be unemployed than adults; women face new obstacles and age-old hurdles.”

She called “on all leaders from all sectors to come to this world gathering with a clear plan for unleashing a more ambitious response to the agreements of 2015; and to showcase examples of scalable, just and tailored solutions.”

Listen to or download our audio News In Brief for 3 June on SoundCloud: