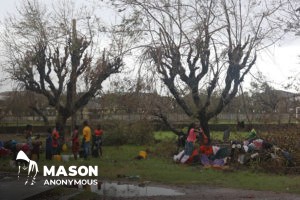 A World Meteorological Organization (WMO) fact-finding mission to Mozambique recommended on Wednesday a package of disaster-risk-reduction priorities to strengthen the country’s early warning systems and reduce damage due to weather, climate and water-related hazards.

“Mozambique needs to build resilience”, WMO Secretary-General Petteri Taalas said in a message to an international pledging conference to secure support for reconstruction, on Saturday. “Although the number of tropical cyclones globally is expected to reduce in the future, the number of most intense tropical cyclones (category 4 and 5), associated with more rainfall, will increase in a warming climate,” he said.

He asserted that future sea level rise “will exacerbate the impact of storm surge on coastal regions” and raise flooding concerns, “particularly for low-lying cities such as Beira”, which was inundated by the cyclones in March and April. It also draws attention to Mozambique’s vulnerability to floods from both rivers and sea. The fact-finding team said that a $27 million investment is needed to strengthen meteorological and water supply sectors.

This includes reconstruction, rehabilitation and modernization of infrastructure and equipment, land surveys for flood-risk mapping and satellite rainfall estimation and forecast training.

The team of meteorologists and hydrologists, headed by WMO’s Filipe Lúcio, will present a report to an international pledging conference for Mozambique, taking place on Friday and Saturday in Beira.

On 14 March, months-worth of rain fell in a matter of hours around the coastal city as Idai provoked one of the worst disasters to ever hit the southern hemisphere.

“In times of floods, Mozambicans seek safety on roofs of buildings. But the ferocity of Idai’s winds blew the roofs away”, said Mr. Lucio. “It is a salutary warning about the future scale of the combined challenges from urbanization and climate change-related sea level rise and extreme weather”.

The fact-finding team’s visit coincided with Cyclone Kenneth, the most intense tropical cyclone ever known to have hit the Cabo Delgado province, on 25 April.

According to the report, WMO identified major weaknesses on preparedness, emergency coordination and response, including the lack of a back-up communication system for warning and emergency operations and an evacuation plan for cities, particularly in low-lying areas.

Moreover, because Mozambique is downstream of nine major river basins, it is prone to devastating floods, but water use upstream can also exacerbated low flows during droughts.

While climate change projections indicate a global decrease in numbers of tropical storms and cyclones, they signal possible increases in intensities and associated rainfall. And, assuming all other factors are equal, WMO predicts that sea-level rise will exacerbate the impact of storm surge on coastal regions.