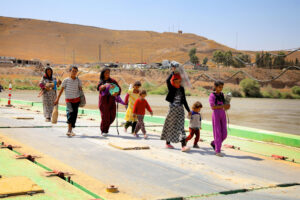 The Special Rapporteur on the human rights of internally displaced persons, Cecilia Jimenez-Damary, welcomed the adoption on 1 March of The Law on Yazidi Survivors, which recognizes ISIL’s violations against women and girls from the Yazidi, Turkman, Christian and Shabaks minorities – including kidnapping, sexual enslavement, forced marriage, pregnancy and abortion – as genocide and crimes against humanity.

“This is a major step towards promoting justice for crimes committed by ISIL”, she said.

More on the law

In addition to providing reparation to the victims, the law provides compensation for survivors, as well as measures for their rehabilitation and reintegration into society, and the prevention of such crimes in the future.

It also offers pensions, the provision of land, housing and education, and a quota in public sector employment.

“When I visited Iraq in February last year, I witnessed the situation of Yazidi women and girls who had survived atrocities by ISIL. Despite their remarkable resilience and strength to rebuild their lives, many continued to live in displacement and faced many challenges to achieve a durable solution”, said the UN independent expert.

Ms. Jimenez-Damary called for “a broad implementation of the law” to also cover survivors from other minorities.

Children born out of rape

At the same time, the Special Rapporteur expressed deep concern over the situation of the children born out of rape by ISIL fighters during the conflict.

Mothers often encounter obstacles to register them because of the absence of a father – and children of Yazidi women born of sexual exploitation and enslavement by ISIL are not accepted in Yazidi communities.

“These children are at risk of abandonment, and these Yazidi mothers face the difficult choice of either leaving their children or their community”, said Ms. Jimenez-Damary.

Unfortunately, this situation is not addressed by this law.

The UN rights expert called on the Government of Iraq to strengthen mediation and social cohesion efforts, with the participation of those affected, to protect the rights of both the children and their mothers, and to work toward “a durable solution to their displacement.”

She also called on the international community to support victim-centred programmes and initiatives in Iraq to this end, as well as to contribute to the implementation of the law.

Special Rapporteurs are appointed by the Geneva-based UN Human Rights Council to examine and report back on a specific human rights theme or a country situation. Their positions are honorary and they are not they paid for their work.