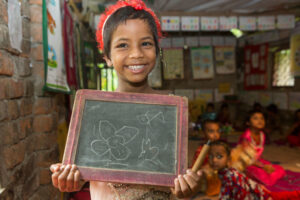 In its new global report published on Thursday, entitled Reimagining our futures together: A new social contract for education, the agency is proposing answers to these three essential questions.

Over a million people took part in the global consultation process that informed the report, which calls for a major transformation to repair past injustices and enhance the capacity to act together for a more sustainable and just future.

Two years in the making, UNESCO wants the publication to start a global debate and movement, to forge a new contract between parents, children, and educators around the world.

To transform the future, education itself must be transformed.

ONE MILLION people from around the globe 🌍 have added their voices to @UNESCO’s #FuturesOfEducation report. Have you?

According to the agency, the world is at a turning point and global disparities mean that education is not yet fulfilling its promise to help shape peaceful, just, and sustainable futures.

High living standards coexist with gaping inequalities and, even though the public square is largely active, “the fabric of civil society and democracy is fraying in many places around the world.”

For UNESCO, rapid technological changes are also transforming lives, but these innovations “are not adequately directed at equity, inclusion and democratic participation.”

“That’s why we must reimagine education”, the report argues.

During the twentieth century, public education was essentially aimed at supporting national citizenship and development efforts through the form of compulsory schooling for children and youth.

Today, however, as the world faces grave risks to the future, UNESCO believes “we must urgently reinvent education to help address these common challenges.”

In that context, the agency is asking for a new social contract that must unite the world “around collective endeavours and provide the knowledge and innovation needed to shape sustainable and peaceful futures for all anchored in social, economic, and environmental justice.”

It also must “champion the role played by teachers”, the report says.

For UNESCO, this new social contract must build on the broad principles that underpin human rights, such as inclusion and equity, cooperation, and solidarity.

It should also be governed by two foundational principles: assuring the right to quality education throughout life, and strengthening education as a public common good, the agency says.

“The ways we currently organize education across the world do not do enough to ensure just and peaceful societies, a healthy planet, and shared progress that benefits all. In fact, some of our difficulties stem from how we educate”, the report says.

The publication includes some proposals to renew the sector.

To start, pedagogy – the practice of teaching – needs to move from a focus on teacher-driven lessons centred on individual accomplishment, to instead emphasize cooperation, collaboration and solidarity, UNESCO argues.

Curricula, that has been often organized as a grid of subjects, needs to emphasize ecological, intercultural and interdisciplinary learning.

Teaching needs to “move from being considered an individual practice to becoming further professionalized as a collaborative endeavour.”

The publication calls schools “necessary global institutions that need to be safeguarded” but argues that the world “should move from the imposition of universal models and reimagine schools, including architectures, spaces, times, timetables, and student groupings in diverse ways.”

The agency concludes saying the report “is more an invitation to think and imagine than a blueprint”, and the questions should be answered in communities, countries, schools, educational programmes and systems all over the world.