The pair received the award for their efforts to defend freedom of expression in their respective countries, and the Nobel committee called them “representatives of all journalists who stand up for this ideal”.

Mr. Muratov is the co-founder and editor of Novaya Gazeta, which has stood up for press freedom and freedom of speech in Russia for decades. Six journalists who worked for the newspaper have been reportedly murdered in connection with their investigative work, shining a light on corruption, crime and other alleged abuses.

In an exclusive interview with UN News this week, he explained what he would do with his award money, why he loves Novaya Gazeta, and his thoughts about press censorship.

UN News: We planned to have this interview last night, but I was told that you were with Mikhail Gorbachev then. Can you tell us about that?

Dmitry Muratov: We talked, he joked. For example, he spoke about Novaya Gazeta’s mission and he commended us for “rarely letting the truth down”. I admit, we are not perfect, and we have made our mistakes.

UN News: Are you happy with such an evaluation of your job?

Dmitry Muratov: Yes, I am. Very.

UN News: I read online that Novaya Gazeta, when it was being establish, was partially financed by Nobel Peace Prize money received by Mikhail Gorbachev himself.

Dmitry Muratov: He told me yesterday that, in fact, it was not Nobel Prize money. Rather the money from publishing Raisa Gorbacheva’s book [the late wife of Mikhail Gorbachev, who died in 1999] entitled I hope. They donated it to buy computers for Novaya Gazeta. But I prefer to think that some prize money was there too.

Since this is a Peace Prize, then I believe it should contribute to this cause.

UN News: How will you spend the monetary award? Do you already have plans?

Dmitry Muratov: Let’s start with me, okay? I will not take or receive even one single cent of it. That is out of the question.

Since it is a Peace Prize, I believe it should contribute to that cause. We held an editorial board meeting where we decided how to distribute the Nobel Prize money.

It will be donated to a health foundation that helps journalists; to a foundation that supports children with spinal muscular atrophy and other serious rare diseases; a part will go to the Anna Politkovskaya Prize Foundation; and, of course, a part will go to the children’s hospice in Moscow, the Vera Foundation and the Dmitry Rogachev Clinic, where children with leukemia are treated. That’s it!

UN News: You have repeatedly said that you regard the Prize as an award to the entire staff of Novaya Gazeta and, especially, to the ones who are gone. Anna Politkovskaya was killed 15 years ago.

UN News: Don’t you think that the prize has come late? 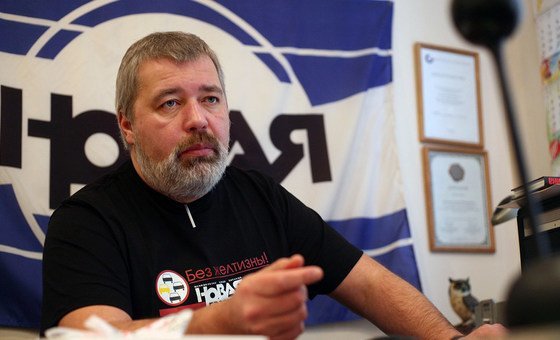 Dmitry Muratov, Russian journalist and 2021 Nobel Peace Prize laureate in his office as Editor-in-Chief of Novaya Gazeta, by Novaya Gazeta

UN News: Congratulating the Nobel Peace Prize laureates the UN Secretary General said, I quote: “No society can be free and fair without journalists who are able to investigate wrongdoings, bring information to the citizens, hold leaders accountable and speak truth to power”. What do you think?

Dmitry Muratov: Here’s what I think. This is an absolutely accurate idea, and I would like to build on it. You see, the UN Secretary General is talking about censorship.

What is censorship? It is a manifestation of distrust to your own people. Those who introduce censorship do not trust their people. In different countries of the world, many individuals who, of course, consider themselves independent, simply do not believe their people.

They think that they are the ones to determine what the people should read, watch, see and listen to. Such lack of trust to the people is the most dangerous thing. People must be trusted.

UN News: What would you like to tell our listeners about your newspaper? How do you survive these days?

Dmitry Muratov: Well, first of all, thanks to the people we have. We have absolutely amazing staff — these are the stars of Soviet and Russian journalism as well as people who will become the stars of modern journalism. Some write essays, others, for example, do big data research.

The combination of both, the synergy that in our editorial office, people who write brilliant texts, and those who do coding and programming, who dig for impossible information, is for me the recipe for our outstanding success.

I really love this “angry crew of kind people”.

UN News: What do you know about Maria Ressa? Have you met?

Dmitry Muratov: I know a lot about her! She is an outstanding journalist. The first issue of the newspaper published after we learnt about the prize had an image of Maria Ressa on the front page, not our faces.

We have the highest regard for her. In the past, several members of our staff took her training courses. Today we sent her a letter. We really want to invite the Nobel Peace Prize laureate to give a lecture to the Novaya Gazeta staff and the students who will join.

She is an outstanding woman who single-handedly confronts tyranny.

[Maria Ressa] is an outstanding woman who single-handedly confronts tyranny.

UN News: So you approve of the choice by the Nobel Committee?

Dmitry Muratov: I’m delighted. Naturally, I am also delighted that Novaya Gazeta was given the award, it is true, but I think that Maria Ressa is a brilliant choice.

I don’t know how it happened, how it all happened. We will only find out about this in fifty years [when the Nobel Committee discloses all the information behind the nomination and selection process].

I won’t live that long to see it, though. But the fact that my name is mentioned next to hers is just fascinating!

UN News: Do you know how the award ceremony will be held?

Dmitry Muratov: I received a letter this morning saying that the ceremony will be held in Oslo. But let me wrap up our conversation by saying that we would be happy to greet Maria, in our office in Moscow.