“We have the ability to provide resources to communities destroyed by violence, Ms. Murad, who also serves as a UN Goodwill Ambassador, said.  “We simply lack collective political will to do so.”

Speaking during an online event titled #EndSGBV, hosted by the United Arab Emirates, Norway and Somalia on the margins of General Assembly general debate, Ms. Murad – jointly awarded the 2018 Nobel peace prize with Congolese gynecologist Denis Mukwege for their efforts to end the use of sexual violence as a weapon of war – took stock of progress over the last year.

“We must critically look at what we did well, where we can be really proud because we have made a true difference”, she said, “but also, be honest and transparent on where we missed opportunities to stop gender-based violence and truly be there for victims.”

She described the launch of the Global Survivors Fund as “a major achievement”, along with the Murad Code, a protocol she launched with the United Kingdom for those collecting information from survivors on conflict-related sexual violence.

In a post-conflict region like Iraq, she said survivors must play an active role in the peacebuilding process. “Survivors know best what they need to heal and recover.”  Efforts to engage them at every level of their recovery will empower them.

Perhaps nowhere is the international unwillingness to engage more stark, than in the experience of the Yazidis, she said, most of whom live in northern Iraq and who in 2014 became victims of genocide by ISIL/Da’esh terrorists, in the group’s pernicious campaign to wipe out non-Islamic influence.

Stressing that their situation remains “virtually unchanged,” she said it pains her greatly that once again she must convey to the world the seriousness of their plight.  Hundreds of thousands of Yazidis are internally displaced in camps, where conditions are dangerous – especially in light of COVID-19.

Their destroyed homeland of Sinjar, lacks critical infrastructure to support their needs.  It is ignored, lacking any dedicated effort to build a stable local government and security force committed to equal protection for all citizens.  Thus, Yazidis cannot return safely. 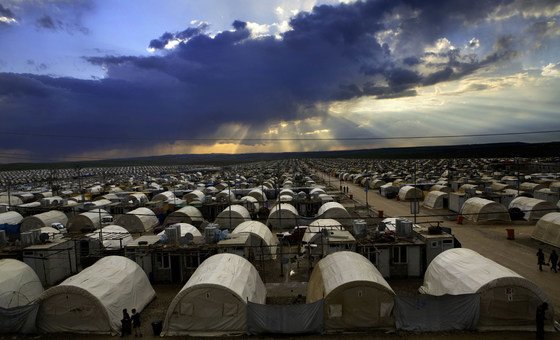 File photo: View of the Kabarto refugee camp, now home to many of the Yazidi forced to flee the city of Sinjar, over-run by ISIS, in August 2014, by Reza / Webistan

Most importantly, she said thousands of Yazidis still face sexual violence daily at the hands of ISIL/Da’esh, with more than 2,800 women and children still missing and in captivity.  They have been subjected to sexual violence and slavery for over six years.

“It is incredibly disheartening to understand no collective search and rescue efforts have been made by the Iraqi Government or the United Nations to find these women and children”, she said. “Make no mistake, the global community has abandoned over 2,800 human beings.”

To be sure, it is the responsibility of Iraq, the United Nations and the international community to take immediate steps to rescue these women and children, she said.  “Anything less is unacceptable.”  Yazidi families cannot rebuild their lives without knowing the fate of their loved ones. “Let us be clear:  It is a moral imperative to respond to the vast needs of fellow human beings”.

She called for a collaborative grass roots approach, with international organizations, the United Nations and Governments working closely with local non-governmental groups to develop contextually specific approaches.  Development can only be sustained if local communities are part of every decision that impacts them.  “It is vital that we listen to the communities we serve,” she assured.

Drawing attention to Nadia’s Initiative, which seeks to empower Yazidis to rebuild their lives and advocates for investments that will provide survivors of sexual and gender-based violence with comprehensive support, she said non-governmental organizations cannot rebuild post-conflict communities on their own.

In Iraq, she pressed the Government to rebuild Sinjar, provide survivors with reparations and stabilize local governments.  While investigations have begun, evidence has been collected and survivors have recorded their testimonies, justice has yet to be served.

It is up to Iraq and the international community to try ISIL/Da’esh perpetrators for crimes against humanity, war crimes and genocide, she stressed.  Yazidis and other communities destroyed by violence deserve international support.