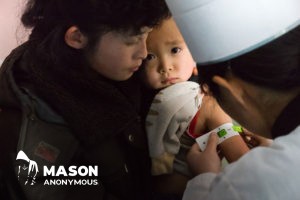 Based on more than 200 first-hand accounts of escapees from the country, officially known as the Democratic People’s Republic of Korea (DPRK), the report asserts that the State-run public distribution system collapsed in the mid-1990s, forcing people to work in informal markets, where they have no choice but to bribe officials to avoid arrest.

#NorthKorea: People are trapped in a vicious cycle – they turn to rudimentary markets where they face a host of #HumanRightsViolations in an uncertain legal environment.

It also highlights “appalling” levels of hunger that affects around 10.9 million people – more than 43 per cent of the population – with north-eastern and rural provinces worst-affected.

The report also details how huge resources have been diverted to increasing DPRK’s military capacity and maintaining a huge standing army, which has kept one million young men and women from the workplace.

Among the report’s suggested reforms are a review of the criminal code to end prosecutions for engaging in legitimate market activities, and respect for freedom of movement across the country’s borders – and even inside DPRK.

“The rights to food, health, shelter, work, freedom of movement and liberty are universal and inalienable, but in North Korea they depend primarily on the ability of individuals to bribe State officials”, said UN High Commissioner for Human Rights, Michelle Bachelet, in reaction to the report.

The constant threat of arrest and prosecution provides State officials with a powerful means to extort money and other favours from people desperate to avoid detention in inhumane conditions, the report says. In addition, the living conditions and treatment of detainees can also depend on the payment of bribes.

“I felt it unfair that one could bribe one’s way out of [detention], when another suffers much more as a result of being unable to bribe”, said one interviewee who spoke to UN investigators. “Bribery is effective in North Korea. One cannot lead a life in North Korea if he or she does not bribe his or her way.”

Another interviewee said bluntly, that everyone has to resort to the informal sector, just to survive: “If you just follow instructions coming from the State, you starve to death.”

The report also details how women seeking ways to make ends meet, are particularly vulnerable to further abuse at the hands of third parties, including brokers and traffickers.

The UN rights chief called for far-reaching changes: “Our report is a stark illustration of how important it is that the Government tackles the country’s profound human rights problems.  Only then can the endemic system of corruption which pervades all aspects of life be effectively dismantled,” she said.

The report details how the State has simply not fulfilled its obligations under international human rights law to realize the right of its citizens to an adequate standard of living. It has neither sought to modify a failed public system, nor helped to establish a functional and legal private sector.

“People must not be arrested, detained, prosecuted or subjected to extortion simply for trying to acquire an adequate standard of living,” concluded Ms. Bachelet. “Addressing these issues could open a path to tackling the wider range of human rights concerns that exist in the DPRK today. A significant set of reforms would be in everybody’s interests, including those of the Government and of the international community.”