The finding is in line with a trend showing that people in all regions of the world have been eating more calories since the year 2000, with the highest spike, in Asian countries in 2021.

Europe and North America consumed most calories last year – at 3,540 per day – while African nations consumed the least: 2,600. Oceania’s calorie count was closest to the United States’ and Europe’s, at around 3,150.

Data from the UN agency also indicates that average temperatures in 2021 were more than 1.4 degrees Celsius warmer, than between 1951 and 1980.

Greenhouse gas emissions on agricultural land also declined by four per cent between 2000 and 2020, FAO said, with 70 per cent generated on farms.

Based on data from more than 20,000 indicators covering more than 245 countries and territories, FAO’s number-crunchers have found that 866 million people work in agriculture today.

That number amounts to more than a quarter of the global labour market and its worth is $3.6 trillion; compared to the year 2000, this represents “a 78 per cent increase in economic value, produced by 16 percent fewer people, with Africa posting double that pace of growth”, the UN agency said.

Vegetable oil production increased by 125 per cent over that period, with palm oil output up by 236 per cent. Meat output, led by chicken, grew by 45 per cent, while fruits and vegetables saw growth of 20 per cent or less.

Among the dizzying number of facts provided by FAO that could quite conceivably crop up in a pub quiz, sugarcane is the world’s largest harvest by volume, with 1. 9 million tonnes annually. Maize is next, at 1.2 million tonnes.

FAO/Ryanwil Baldovino
A farmer transplants rice in a paddy field in the Philippines.

In addition, global food exports have risen to $1.42 trillion, up 3.7 times since the turn of the century.

A mindboggling 4.74 billion hectares of the planet’s surface is agricultural land, including meadows and pastures, as well as crops.

Nonetheless, the overall area used for farming has fallen by three per cent since the year 2000, and it is six times lower per capita than at the turn of the century, with Africa again in the lead. 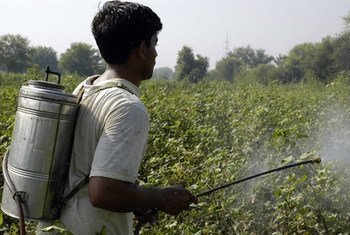 FAO’s data experts also noted that worldwide pesticide use peaked in 2012 and began declining in 2017. The countries with the highest pesticide application per hectare are Saint Lucia, Maldives and Oman.