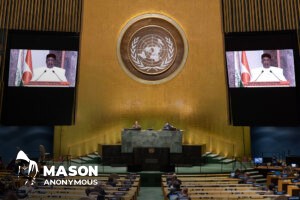 “Niger is convinced that the many threats to international peace and security cannot be resolved by individual states, but by collective action by the international community,” Mr. Issoufou told the Assembly, which is holding its annual high-level session virtually due to the ongoing coronavirus pandemic.

Terrorism in the Sahel

Mr. Issoufou welcomed the strengthening of the operational and intelligence capacities of the defense and security forces at the national level, the operationalization of the multinational Joint Force (Benin, Cameroon, Niger, Nigeria and Chad) in the Lake Chad Basin and the G5 Sahel Joint Force (Burkina Faso, Mali, Mauritania, Niger and Chad).

“For long-term financing of [these joint initiatives], I welcome the proposal of [UN] Secretary-General António Guterres, who has recommended drawing inspiration from the model used to set up the African Union (AU) mission in Somalia (AMISOM),” he stated, referring to the regional peacekeeping operation led by that AU and backed by the UN Security Council.

The creation of the coalition to fight terrorism in the Sahel, the establishment of a joint command for all the participating military forces including those French (Barkhane) and European (Takuba), the upcoming deployment by the AU of a contingent of 3,000 men, the initiatives of the Economic Community of West African States (ECOWAS), “are all elements that raise the hope of a victory over our common enemy: terrorism and organized crime ,” he continued.

Recalling that Niger holds the presidency of the Security Council for September, President Issoufou expressed concern about the situation in Mali after the 18 August coup d’état in that neighboring Sahelian country.

“In Mali, and throughout the G5 Sahel area, we need multilateralism to continue the fight against terrorism in all its forms, taking due account of the dimensions of women and young people, because it is the breeding ground for poverty which terrorism thrives,” Mr. Issoufou stressed.

Turning to the ongoing pandemic, he said COVID-19 challenges efforts of all nations to “create the world we want”, and therefore the time has come to create a new “social contract” for nature.

To recover better, the international community must align crisis exit strategies with the Sustainable Development Goals (SDGS) and create a sustainable and inclusive economy.

“We must invent an economy that respects people and the environment. The multilateral world we want cannot be based exclusively on the balance of power between the great Powers. Today we need a more agile, more democratic, more coordinated and more efficient UN, which leads us towards a more secure, more inclusive and sustainable world,” the President concluded.