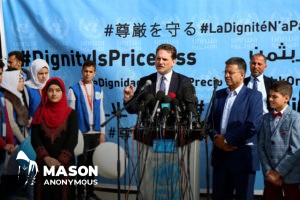 The findings excluded “fraud or misappropriation of funds” on the part of Mr. Krähenbühl, however, there are “managerial issues that need to be addressed”, the UN said, in a statement to correspondents in New York.

In a statement read out at the regular noon briefing, Spokesperson Stéphane Dujarric said the Secretary-General “thanked Mr. Krähenbühl for his commitment and constant dedication to UNRWA and to Palestine refugees. The Secretary-General reiterates his appreciation to UNRWA for their excellent work, which is essential to the well-being of Palestine refugees.”

Mr. Dujarric said the Swiss national’s resignation was “effective immediately” but gave no other details: “At this time, it is vital that Member States and other partners remain committed to UNRWA and the services it provides. It is also critical for the international community to support the crucial work performed by the Agency in the areas of health, education, and humanitarian assistance, which is a source of stability in a volatile region.”

Earlier in the day, the Spokesperson’s Office announced that the former UNRWA chief had been placed on “administrative leave”, pending a “final determination” on any action that should be taken following the detailed OIOS report.

In a statement on Wednesday, UNRWA said that “over the last few months, UNRWA has initiated an internal review of its governance, management and accountability functions, so as to ensure it practices the highest standards of professionalism, transparency and efficiency”.

The agency said the review had “revealed a number of areas which required strengthening, and the agency has already commenced corrective action and will be pursuing further initiatives and improvements over the coming months.”

The agency provides basic education for 525,000 boys and girls at over 700 UNRWA schools; emergency food and cash assistance to 1.7 million Palestine refugees; access to primary health care for 3 million refugees, including pre-natal care; and a more dignified life and security for around 5.3 million refugees overall.

In late January, 2018, the agency launched a global fundraising campaign to allow it to continue its work, following the announcement by the United States that it was cutting its funding towards UNRWA operations by around $300 million.