Talking to UN News ahead of the International Day of Peacekeepers, which is marked annually on 29 May, she explains how she continues to break down gender barriers.

“I’m the Coordinator of the Security Teams at the Ngaragba Central Prison in Bangui, the capital of Central African Republic (CAR).

My main task is to work with national partners, in order to build their capacities to maintain law and order and effective justice systems; this is a key function of peacekeeping.

As the main trainer and coordinator of rapid intervention activities, I and my team of 42 officers, support national prison staff in incident and crisis management.

I have introduced rapid intervention training modules into the national curriculum of CAR’s prison administration.

MINUSCA/Hervé Serefio
A simulation exercise on the management of a riot by inmates takes place in Ngaragba Prison in the Central African Republic.

The field of security is a typically male-dominated environment, where women are often placed second or even ignored, because of stereotypical perceptions that men are better suited for the job.

I had the courage and strength, and vocation, to break down barriers and assert myself confidently in this field.

I believe that a key factor in my success as the main trainer and coordinator of the rapid intervention activities at Ngaragba Prison is my perseverance. Where other colleagues resist, I volunteer to lead.

This has helped reduce certain prejudices about the capabilities of women in this work environment. I give maximum effort to the tasks entrusted to me; often more than male colleagues.

Today my colleagues admire my work, and encourage me to move forward. This has made other women from MINUSCA and the CAR prison administration more interested, with some women opting to train and work in rapid intervention.

To help increase the number of women deployed in non-traditional roles, I organize team meetings where I sensitize women to take an active part in the tasks that some consider are (better suited for) men.

I invite women to take part in training that aims to give them opportunities and allow them into spaces that were once considered men’s domain. I also entrust them with tasks in the same way as men.

My proudest achievement is the recruitment and initial training of 300 civilian professional prison officers, including five women, who are part of the prison administration’s rapid intervention team set up in 2022.

By setting an example as the Commander of the Rapid Response Team of MINUSCA’s Corrections Unit, I am changing the position and perception of women… in the field of security.

Together, with all the other women pioneers, we have a responsibility to carry the torch and break down gender stereotypes, prejudices and barriers against women in the field of corrections and security.” 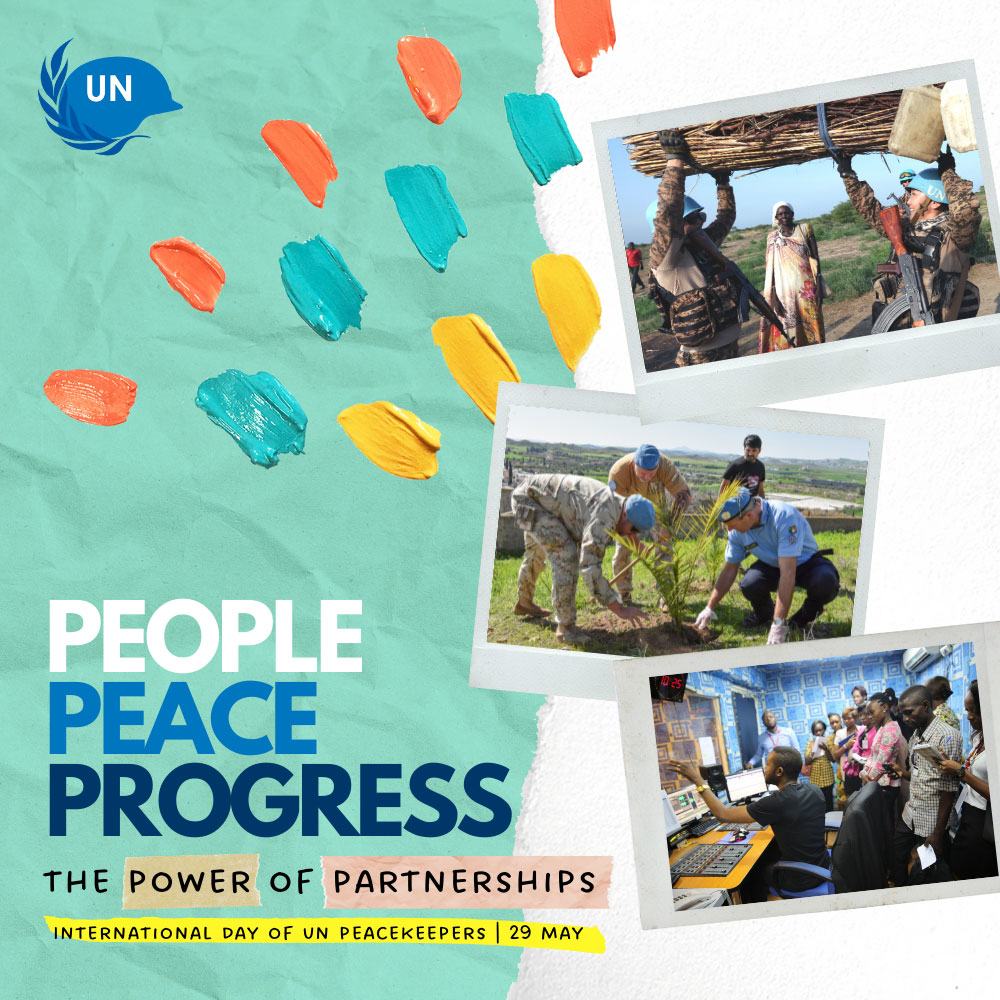 United Nations
29 May is the International Day of UN Peacekeepers – a day to pay tribute to our uniformed and civilian personnel.

More than one million peacekeepers have served under the UN flag, but they are not alone in the pursuit of peace.

Peacekeeping is powered by strong and diverse partnerships, a theme which is highlighted in this year’s International Day of Peacekeepers.