“From what I have seen that future will likely be one of inequality, where the poor plays catch-up with the rich, with no hope nor chance of ever succeeding in closing the gap. We cannot, in all conscience, allow this to happen. An unjust order is inherently volatile,” he said.

The Head of State was speaking at UN Headquarters at the opening of the high-level week of the General Assembly. After being held virtually last year due the coronavirus pandemic, this year’s gathering will feature “hybrid” activities that will include leaders in person along with virtual participants.

Describing the current global situation as “bleak”, he remembered that the pandemic upended everyone’s lives, the climate crisis has worsened, inequalities have deepened, and the geopolitical balance is in a state of dangerous flux.

“Certainly, these are complex problems. But one thing is clear, they all hit the poor the hardest. Injustice is the common thread that ties these issues together,” Mr. Duterte argued. 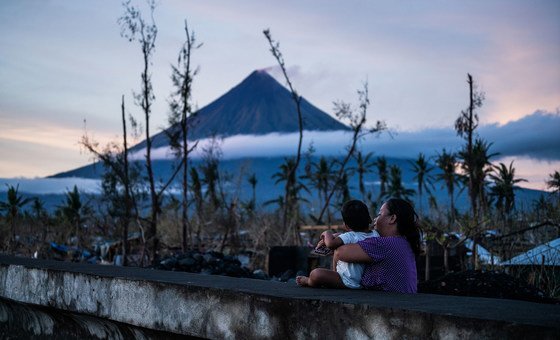 A typhoon destroyed the house of a family in Molinao, Philippines. Mr. Duterte said the consequences of climate change are not the same for everyone, by UNOCHA/Martin San Diego

Multilateralism as the solution

The President then addressed the representatives in the room, asking how, as governments, they could reconcile their obligations to their own citizens with their responsibility to the rest of humanity?

“We recognize that only inclusive multilateralism can deliver the global public goods we need,” he answered.

He pointed to deeply uneven COVID-19 vaccination rates as an example. Saying some rich countries are now talking about booster shots, while developing nations consider half-doses, he called the behavior “shocking beyond belief.”

“[It] must be condemned for what it is, a selfish act that can neither be justified rationally nor morally,” he said.

The leader from the Philippines also pointed to “the varying vulnerabilities of countries around the globe” to climate change, saying the risks and burden “are simply not the same for everyone.”

For Mr. Duterte, the world is now “at a critical tipping point, where failure to act leads to cataclysmic consequences for the whole of humankind.”

Ahead of the COP26, the UN Climate Conference that kicks off at the end of the month in October, the Philippines have submitted their first Nationally Determined Contribution, with a target to reduce greenhouse gas emissions by 75 per cent by 2030. The country has also issued a moratorium on the construction of new coal power plants and a directive to explore the nuclear energy option.

The President said, though, that this contribution “will be rendered useless” without urgent climate action from developed countries, especially from those that can truly tip the balance.

“This is a moral obligation that cannot be avoided,” he said.

War on drugs and UN reform

He said his Government “has a mandate and an obligation” to his people and will deal with all criminals “with the full force” of the country’s laws.

He admitted that “achieving this goal has not been without challenges” and informed that he instructed the Department of Justice and the Philippine National Police to review the conduct of the campaign.

“Those found to have acted beyond bounds during operations shall be made accountable before our laws,” he promised.

Lastly, he argued that the world’s institutions, including the United Nations, “have proven to be inadequate” in dealing with global crisis that demand effective global governance.

For the Philippine’s President, “the UN a product of an era long past, it no longer reflects the political and economic realities of today.”

“If the UN is to lead the world out of the many crises we face, things need to change. The UN must empower itself, by reforming itself. Therein lies the hope for humanity,” he concluded.