After making landfall on the eastern island of Samar, the eye of the Category 3 typhoon, known locally as Ambo, continued with maximum sustained winds of 125 km/h, with gusts of up to 165 km/h, to the island of Masbate before wreaking havoc northwest towards mainland Luzon – where some 60 million people are under extended COVID-19 quarantine.

As Typhoon #AmboPH (intl #Vongfong) makes landfall in the country, IOM Philippines team is on ground to assess the damage in affected areas across the provinces of Albay and Sorsogon in the Bicol region 🚙 pic.twitter.com/Kt8g1MiGSV

The heavy winds and rain destroyed hundreds of buildings along with crops and fishing boats, while physical distancing rules have complicated the rescue of some 200,000 people who are at risk from flooding or landslides.

With large parts of the country under movement restrictions and lockdowns, UN humanitarians are worried that the pandemic could impede emergency response efforts.

“The storm is also expected to affect Metro Manila and Laguna province, both areas declared as COVID-19 hotspots with a high number of confirmed cases”, OCHA said.

And with over 7,600 cases, the National Capital Region has almost 65 per cent of all confirmed occurrences in the country, raising concerns of accelerated transmission should residents need to be evacuated from these densely populated, flood-prone areas.

The Government is leading Typhoon Vongfong preparedness and response efforts, but local officials are pointing to the double challenge of keeping their residents safe from both the typhoon and COVID-19, while noting the difficulty in maintaining physical distancing throughout temporary shelters.

A spokesperson for the Office of Civil Defense in Manila, Mark Timbal, called it “a unique situation” because it is the first time the country is facing a natural hazard while dealing with a health pandemic.
Several local governments have ordered that evacuation centres be filled only to half capacity, to stem the virus from spreading.

And the Catholic Church has offered the use of its churches and chapels as additional shelters, while some shopping malls have offered their spaces as well.

Meanwhile, the UN Humanitarian Country Team has initiated measures, based on its protocols, and continues to monitor the situation.
OCHA, meanwhile, is in touch with national authorities and partners in the affected areas to make impact and needs assessments.

So far, the most pressing requirements are for food relief items, face masks, sanitation supplies in evacuation centers and livelihood support for affected farmers.

The Philippines is one of the most disaster-prone countries in the world, averaging some 22 tropical cyclones a year, according to the UN Office for the Coordination of Humanitarian Affairs (OCHA). 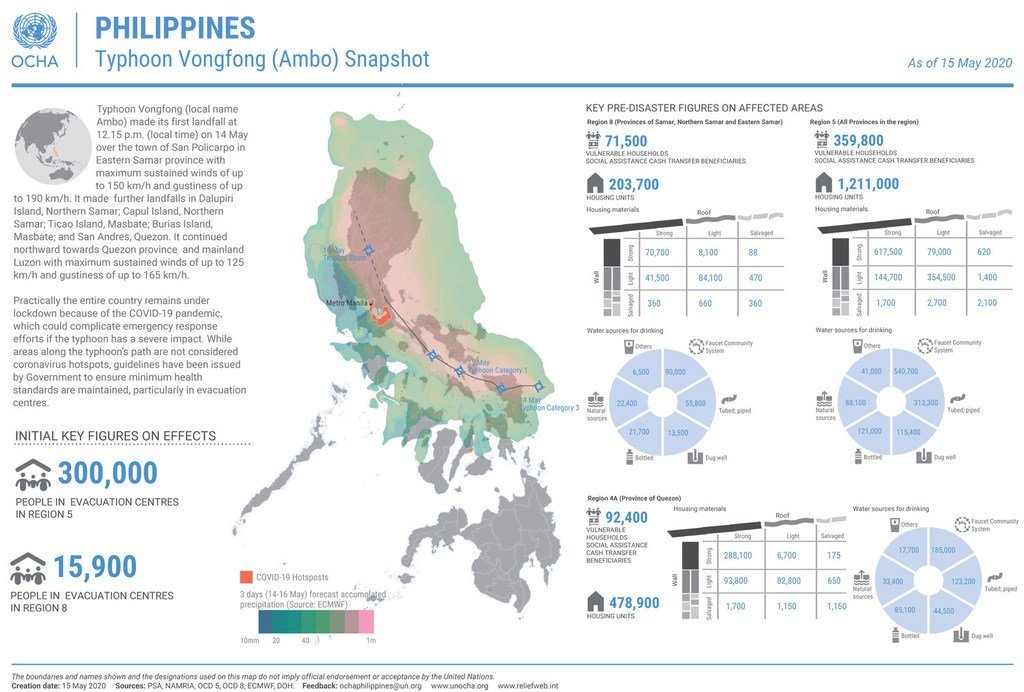