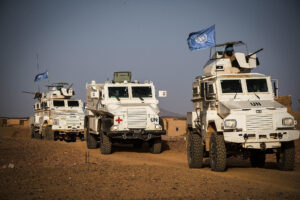 He said the assault was a tragedy, and an “illustration of the bravery and determination of our peacekeepers to support the people of Mali”, noting that the “determined and heroic defense inflicted a serious setback on the attackers”.

In addition to the terrorist threat, Mr. Lacroix expressed concern over the continuing “destabilizing activities of militias” operating along ethnic lines in the restive central region.

In a bid to that ensure militias and armed groups lay down their weapons and join the dialogue process, he called on the transitional Government to improve the security situation in parallel with protecting civilians and restoring State authority and basic social services.

He maintained that the country’s long-term security hinges on the success of its fragile political transition.

The Malian Government has been seeking to restore stability and rebuild following a series of setbacks since early 2012, including a military coup d’état, renewed fighting between Government forces and Tuareg rebels, and the seizure of its northern territory by radical extremists.

Among other things, the UN mission, considered to be the most dangerous UN operation to serve in, supports the implementation of a 2015 Peace Agreement signed by the authorities and two coalitions of armed groups.

While pointing to some recent “encouraging signs”, including the kickstarting of several important institutions, he highlighted the importance of political and institutional reform, such as territorial redistricting as well as electoral and Constitutional law changes.

He said that “an official electoral calendar has not been issued”, pending agreement on various reforms, including poll management.

“At this critical juncture, we encourage Malian political actors to work in a spirit of compromise and enact reforms aimed at creating an environment conducive to peaceful, inclusive, transparent and credible elections”, said the peacekeeping chief.

“These elections represent the litmus test for the current transition and a necessary step towards the return of Mali to constitutional rule”, he said.

Conceding that the implementation of the Peace Agreement has been slow, Mr. Lacroix said that in recent weeks, a positive momentum and a new sense of trust among Malian parties has emerged.

He drew particular attention to the importance of two recent meetings as being “of major symbolic significance” and “essential steps” to improve Malians’ political representation, which he said was “a key factor in its implementation”.

Mr. Lacroix stressed that international support, including that of the Council, remains of “utmost importance to ensure that national stakeholders live up to their commitments”.