“Languages are how we communicate, and they are inextricably linked to our cultures, histories and identity”, the UN chief said, noting that 2019 also marks the International Year of Indigenous Languages.

Indigenous languages are disappearing at an alarming rate, each one taking with it a cultural and intellectual heritage.

We must protect languages under threat of extinction. #IndigenousDay pic.twitter.com/GaHSKc6OKN

He pointed out that almost half of the world’s estimated 6,700 languages, which are mostly indigenous, risk extinction. “With every language that disappears, the world loses a wealth of traditional knowledge” said Mr. Guterres.

Noting that a significant proportion of the estimated 370 million indigenous people in the world today “still lack basic rights, with systematic discrimination and exclusion continuing to threaten ways of life, cultures and identities”, the UN chief stressed that this contradicts the UN Declaration on the Rights of Indigenous Peoples and the 2030 Agenda for Sustainable Development, “with its promise to leave no one behind”.

Offering the UN’s support to realize “the rights and aspirations of indigenous peoples”, the Secretary-General concluded: “I count on Member States to engage and support indigenous peoples in determining their own development through policies that are inclusive, equitable and accessible”.

As part of this year’s commemoration, the UN organized an event at its Headquarters in New York featuring expert panels and innovators on indigenous languages and technology.  But it opened with a ceremonial call to order by Chief Howard Thompson of the United States’ Mohawk Nation.

“People listen for a few moments”, he said. “This is our way when we gather anywhere to give thanks”.

He began by first acknowledging that everyone had “arrived safely and are healthy” before giving thanks to Mother Earth, Grandmother Moon, the stars and the creator, saying “we give thanks daily because it may not be here tomorrow”.

When Deputy Secretary-General Amina J. Mohammed took the podium, she zeroed-in on the “pivotal role” of education for indigenous people to “enjoy and preserve their culture and identity.

“Intercultural and multi-lingual education are necessary to prevent irreparable loss”, she said. “Failure to provide multilingual and inter-cultural education puts indigenous peoples at a disadvantage, threatening their very survival”.

Ms. Mohammed accentuated that more must be done to enable indigenous languages to flourish, “so we may retain the wealth of knowledge and cultures that are part of the world’s rich diversity”.

“On this International Day, let us reaffirm our commitment to work together to realize the rights of indigenous peoples”, she concluded. 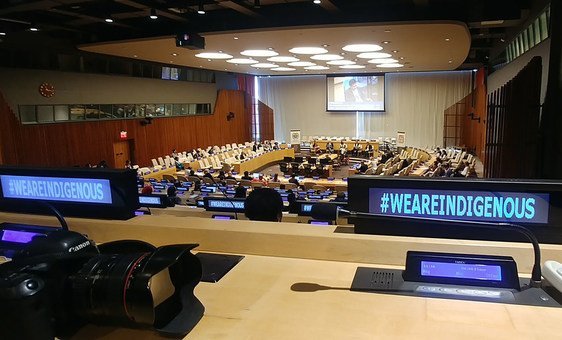 UN Headquarters in New York celebrates the 2019 International Day of the World’s Indigenous People, which is being dedicated to indigenous peoples’ languages. (9 August 2019), by UN News/Elizabeth Scaffidi

More than a means of communication, they also provide “unique ways to see and understand the world” she stated. “They are symbols of identity and belonging; they are vehicles of values to transmit culture and connecting the indigenous peoples with nature”.

And these languages are all vulnerable, many “seriously endangered” or “on the brink of extinction”, according to Ms. Espinosa. “Others, unfortunately, have already been lost forever, taking the wisdom of their peoples with them”, she lamented.

Painting a picture of indigenous languages as “a priceless heritage and a vehicle of ancestral knowledge” on culture, medicine and astronomy , which is “vital to reach the goals of the 2030 Agenda”, she stressed that “we must defend” their rights and respect their way of life as it is “closely linked to the survival of their languages”.

For her part, Cristiana Paşca Palmer, Secretariat chief of the Convention on Biological Diversity, highlighted that although they constitute a relatively small part of the world’s population, indigenous people represent “the largest portion of linguistic and cultural diversity on Earth and their traditional lands and waters overwhelmingly contain the greatest remaining reserves of biodiversity”.

She maintained that the International Day draws attention to their powerful contribution to preserving biodiversity: “It allows us to tell the story of how these communities…have been stewards of biodiversity for millennia, responsible for preserving and even increasing biodiversity through their traditional management practices”, she acknowledged.

Linking biological and cultural diversity, she spelled out that the resilience of human communities and ecosystems are under “grave threat”.

“The colourful tapestry of life is fading like watercolours in the rain”, she bemoaned. “The loss of indigenous, traditional and local languages is closely related to biodiversity loss”.

Moreover, she stated that their local and traditional communities’ languages are “representative of diverse world views, value systems and cultural expressions”.

“Let us commit ourselves to restoring indigenous languages as the vibrant colours of the tapestry of life”, she urged.

In closing, Ms. Palmer emphasized the “centrality of traditional and indigenous languages in strengthening the links between biological and cultural diversity for attaining the global 2050 vision of humanity living in harmony with nature”.