“In so doing, we will contribute to achieving the Sustainable Development Goals (SDGs) for people, planet and prosperity”, Secretary-General António Guterres said in a message commemorating World Wildlife Day.

Forests are home to 80% of all terrestrial wildlife.

The ecosystems they sustain are essential to global biodiversity, human livelihoods & the broader needs of societies & economies globally.

Highlighting the benefits of forests, home to about 80 per cent of all terrestrial wild species, Mr. Guterres explained that “they help regulate the climate and support the livelihoods of hundreds of millions of people”.

In addition, forests resources support, in one way or another, about 90 per cent of the world’s poorest people, a fact especially true for indigenous communities that live in or near them.

“They provide livelihoods and cultural identity”, the UN chief continued.

However, unsustainable exploitation of forests harms these communities and contributes to biodiversity loss and climate disruption, he added.

The latter also raises the risk of zoonotic diseases, such as Ebola and COVID-19, Mr. Guterres said.

“So, on this year’s World Wildlife Day, I urge governments, businesses and people everywhere to scale up efforts to conserve forests and forest species, and to support and listen to the voices of forest communities”, he said.

This year’s World Wildlife Day is being marked with the theme of Forests and Livelihoods: Sustaining People and Planet, underscoring the central role of forests, forest species and ecosystems in sustaining the livelihoods of hundreds of millions of people globally. 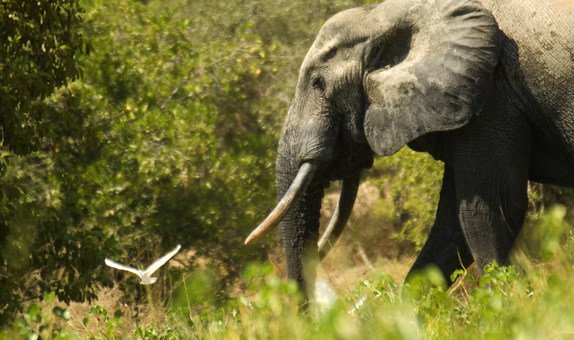 World Bank/Arne Hoel | An elephant and a bird in the wilderness of Ghana.

The Day also recognizes the importance of forest-based livelihoods and promotes forest and forest wildlife management practices that accommodate both human wellbeing and long-term conservation of forests.

Commemorative events include a film festival and a global youth art contest, where young artists highlight the multiple global environmental crises faced by forests ecosystems and the wildlife and humans within, from climate change to biodiversity loss.

The World Wildlife Day, commemorated annually on 3 March, was established in 2013 by the UN General Assembly, to celebrate and raise awareness of the importance of world’s flora and fauna.

The date also marks the day the Convention on International Trade in Endangered Species of Wild Fauna and Flora (CITES) was adopted in 1973.