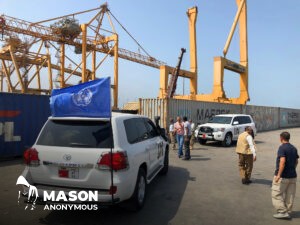 The vessel was converted in 1986 from the single hull oil carrier “Esso Japan”, initially built in 1976, to FSO SAFER. SAFER is legally owned by the national oil company, the Safer Exploration & Production Operation Company (SEPOC). Prior to the escalation of the conflict in 2015, the vessel was used to store and export oil from fields around Ma’rib. The de-facto authorities in Sana’a have controlled the waters where the SAFER is moored since 2015.

2. What would happen if there is a spill or other disaster onboard the SAFER?

The tanker is reportedly holding nearly 1.1 million barrels of oil, which is about four times as much oil as spilled from the Exxon Valdez in 1989. The aging tanker has not undergone regular maintenance since the escalation of the conflict in 2015. SAFER’s structure, equipment and operating systems are deteriorating, leaving the tanker at risk of leaking, exploding or catching fire.

A spill would have catastrophic environmental and humanitarian consequences. Research by independent experts indicates that a major oil spill would severely impact Red Sea ecosystems on which almost 30 million people depend, including at least 1.6 million Yemenis. All the fisheries along the Yemeni west coast would be impacted within days and the livelihoods of the fishing communities would collapse, at a time when 90 per cent of these populations are already dependent on humanitarian aid. The shores of Hudaydah, Hajjah and Taiz will likely be the worst-hit. If fire erupts on SAFER for any reason, more than 8.4 million people could be exposed to harmful levels of pollutants.

A worst-case scenario could lead to the immediate closure of the key port of Hudaydah, which is estimated to cause steep increases in the prices of food and fuel and hinder the delivery of vital humanitarian aid to millions of Yemenis. Yemen, particularly in the north, cannot afford the closure of Hudaydah port. Yemen imports about 90 per cent of its staple food and almost everything else, and so the majority of Yemenis heavily rely on imports to meet their basic needs. A majority of imports enter through Hudaydah. The risk of Hudaydah port closing is even more alarming at a time when Yemen is facing a renewed risk of famine, as confirmed by recent food security assessments. Overall, the economic cost of an oil spill from the SAFER tanker to Yemen fisheries could run to an estimated $1.5 billion over 25 years.

Other Red Sea littoral countries, including Djibouti, Eritrea and Saudi Arabia, are also likely to be impacted. A spill could also debilitate one of the world’s busiest commercial shipping routes through the Red Sea, which accounts for about 10 per cent of global trade.

3. What has the UN been doing to address the issue?

The United Nations has been seeking to deploy an expert mission to assess the condition of the tanker and conduct initial repairs for over two years. In August 2019, the United Nations deployed a team of experts to Djibouti, which was to serve as the staging location for the mission, based on agreement in principle from all parties. That mission was cancelled after the de-facto Houthi authorities withdrew their approval the night before departure.

Negotiations with the de-facto authorities in Sana’a have been ongoing ever since to deploy another mission. These discussions accelerated following reports of a leak of seawater into the SAFER engine room in May 2020. That leak was contained, but it is unclear how long the fix will last.

Since then, the United Nations has been engaging with the de-facto authorities to agree on a detailed Scope of Work for the proposed mission, which has three clear objectives:

The United Nations received a letter on 21 November 2020 from the de-facto authorities in Sana’a officially signaling their approval of the Scope of Work. In light of this approval, the United Nations is now in a position to commence the logistical preparations for the mission, including by using donor funds to secure the technical experts and procure the necessary equipment. The Government of Yemen has expressed its full support for the proposed technical mission as well.

The deployment of the initial expert mission will not eliminate the threat of an oil spill from SAFER. The mission is designed to produce the needed assessment and generate evidence-based options to permanently address the threat posed by the tanker. The United Nations has no prejudgment as to the outcome of the assessment.

The technical experts will conduct light maintenance tasks in accordance with an agreed Scope of Work document, subject to having practical access, as well as environmental limitations, and other considerations regarding the personal safety of the mission’s staff, upholding the integrity of the vessel and its systems, and other relevant factors.

In addition to working on the deployment of an expert mission, UN entities are also supporting contingency planning efforts aimed at strengthening readiness for assistance and response, should a spill occur.

The situation is now even more urgent than it was in 2019. On 27 May, seawater leaked into the engine room, threatening to destabilize or sink the vessel and to cause a massive oil spill. It took the divers from the SAFER corporation a total of 28 hours under water over five days to contain the relatively small leak through a temporary fix. This was a dangerous and a very difficult task and it remains unclear how long this patch may hold. The next incident might not be something that can be contained. The explosion in the port of Beirut serves as a tragic reminder of the cost of inaction.

The international community has been clearer than ever that it expects progress on this critical issue to be made, including at a special Security Council meeting dedicated to the SAFER on 15 July 2020. The mission will be deploying based on multiple rounds of constructive technical discussions with the de-facto authorities and a detailed, mutually-agreed Scope of Work document.

5. What is the Scope of Work document?

The Scope of Work is a mutually-agreed technical document that outlines in detail the objectives of the mission and the tasks the mission staff will undertake once onboard the SAFER. It has been finalized following weeks of consultations with the de-facto authorities in Sana’a in an effort to ensure clarity and to avoid any misunderstandings that could lead to the mission’s delay or cancellation later.

The Scope of Work was endorsed by the de-facto authorities in a formal letter dated 21 November. This has provided the United Nations with the required confidence to start spending donor money and begin the ongoing procurement process for the specialized equipment needed by the mission. The Scope of Work document can be found at this link

6. What is the timeline for the mission’s deployment?

As of late December 2020, the United Nations estimates the mission team can arrive on site by midFebruary. However, the timing of deployment will depend on a number of factors including the market availability of the needed equipment and staff, shipping times and routes, transit weather conditions and funding availability.

The mission will continue to require facilitation as planning progresses including additional permits and authorizations to enable the mission’s success. As such, the continued cooperation of all stakeholders, particularly the de-facto authorities in Sana’a, will be a crucial factor in the timely deployment of the mission. The United Nations appreciates the commitments received from all stakeholders to continue this facilitation.