UN News travelled to the island archipelago, as part of an International Labour Organization (ILO) project, called Dignity at Work, and spoke to the Governor of Hawaii, David Ige

Why are the Sustainable Development Goals important to Hawaii?

Hawaii is the most isolated island community on the planet, 2,500 miles from the nearest landmass, and we see the impacts of climate change and sea-level rise in a real way. These impacts are happening virtually every day. In the last five years, we’ve had at least five “500-year events”; events that would normally occur only once every 500 years. In 2018, we had the most rainfall ever in a single 24-hour period, 51 inches, and this is the most that has ever been recorded in human history.

In 2015, we actually had three Category 4 hurricanes surrounding the islands for the first time in recorded history. We’ve had four [coral] bleaching events. We’ve had “king tides” and rainstorms, so we know that climate change is real and impacts our weather and our communities. 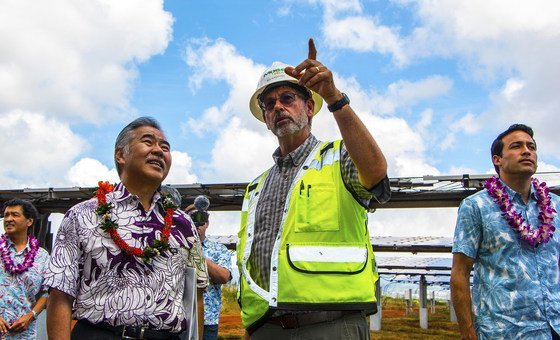 Governor David Ige of Hawaii (left) attends the opening of a solar energy plant on the island of O’ahu., by Clearway Energy Group

It certainly is. As the sea level rises, we see greater erosion of our road system, for example, which creates a physical cost to the state in the sense that we know that the relocation of those highways is essential to maintain our transportation system.

So, we know that we have to begin planning for sea-level rises.

What mitigation measures are you taking now?

‘Sustainable Hawaii’ is an initiative that we launched in 2016, which aligns with the United Nations’ Sustainable Development Goals. Hawaii has committed to reaching 100 per cent clean, renewable energy for electricity by 2045. The initiative also includes managing and protecting 30 per cent of our priority watersheds, because we know that fresh water starts in our watersheds. It means managing 30 per cent of our near ocean waters.

And we’ve been aggressively looking at traditional and native practices, including streamlining our permitting process to allow for the restoration of traditional fish farms all around the state. We know that more than a thousand years ago, Hawaii was completely self-sufficient and that fish farms and managing ocean resources was a thriving part of that self-sufficiency.

Sustainable Hawaii also includes protection against invasive species. Hawaii has more endangered species than anywhere else on the planet. We do have many species that are not found anywhere else in the world, and that’s partly due to our geographic isolation from everyone. 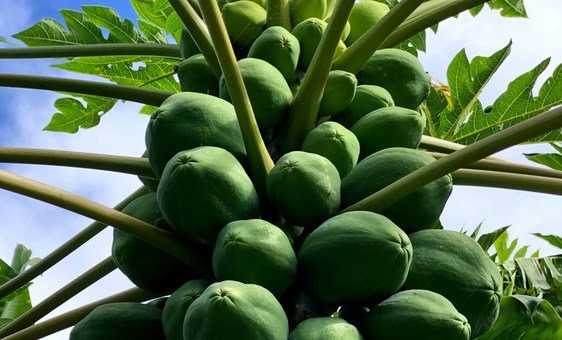 So, we certainly are committed to keeping invasive plants and animals out of our ecosystems and most importantly being able to respond when invasive species are introduced into our islands.

Hawaii is also aiming to double local food production by the end of this year. Hawaii, like many other island communities, has had to import food; more than 90 per cent of the food consumed here is imported from somewhere else, and we recognize again that if we can invest in our communities, we would be able to grow more of our food.

A thousand years ago it’s estimated that the population of Hawaii was very similar to what it is today and at that time they were totally self-reliant. Neither energy nor food was imported. So, we are definitely looking at utilizing traditional and cultural resource management ideas in today’s modern world to return to self-reliance.

Is there one achievement that you could point to, towards building sustainability, that you’re particularly proud of?

Our commitment to 100 per cent clean renewable energy for electricity. At the time we enacted the law to commit to that, no other community had done anything similar and at the National Governors’ Association, people were generally very surprised. They thought that it was so beyond possible that it was a foolish undertaking.

Now, California has embraced the commitment to 100 per cent clean renewable energy and other states are contemplating doing the same. I’m proud that Hawaii has really inspired other states and communities.

What are the new jobs that you’re looking to create? 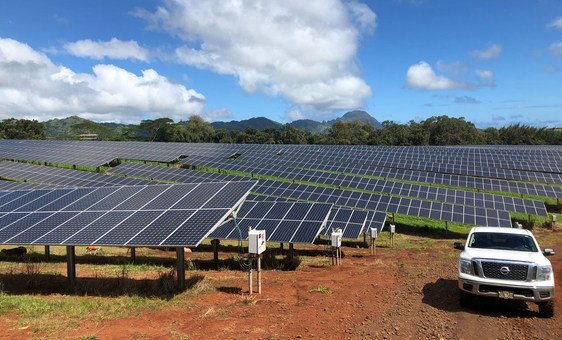 The Kauai Island Utility Cooperative in Hawaii is generating a significant amount of the island’s electricity from solar energy., by UN News/Daniel Dickinson

A lot of the clean renewable energy projects have focused on solar and we’ve had tremendous expansion of rooftop solar for individuals in Hawaii; 37 per cent of the single-family homes now have rooftop solar and are generating energy for themselves. I think that’s the highest penetration in the country. We do know that that rooftop solar and utility-scale solar projects, have created jobs in the construction and support services tied to clean energy.

And are you taking any steps to prepare workers for these new jobs?

We have made a commitment in our community colleges to educate and retrain individuals who are wanting to work in the clean energy fields. We know that education is the key to improving a family’s quality of life. We have focused on a wide range of education programmes that hopefully will provide the skills that our residents need to thrive in the jobs created in the sustainable economy.

What are the biggest challenges you face in creating jobs?

Hawaii, for many years, was a leading sugar and pineapple producer and that spurred a lot of innovation. The last plantation closed in 2016, and now we want to support diversified agriculture.  We do see a lot more technology in farming, for example, smart greenhouses that can produce a wide range of food.

We reinvested in our livestock industry so that we can produce more beef and pork, and we’re getting very close to launching an egg farm, so Hawaii can once again be self-sufficient in egg production.

Part of our commitment for doubling food production is focused on small-scale farmers and getting more young people interested in farming and this is a big challenge. We know that the farms of the future will rely on technology to be more efficient. if we can’t attract a new generation of farmers, then it’ll be very hard to increase local food production.

How optimistic are you about the future of work for Hawaiians?

I’m very optimistic about the future of work. There have been dire predictions that many jobs will be eliminated because of technology. However, in every instance where technology has eliminated jobs, it also has created many new jobs.

So, I am optimistic, as I think that our economies will change and the jobs of the future will be different from jobs in the past. But I also believe that there will be more work for our citizens, and it will be different work, but it would be just as challenging and rewarding.

We recognize as an island that we need to be committed to being more sustainable for the long-term benefit of the community. The overall majority of people in Hawaii feel the same way and they are willing to take on the challenge of sustainable development by investing in our communities.

The UN, SDGs and Hawaii